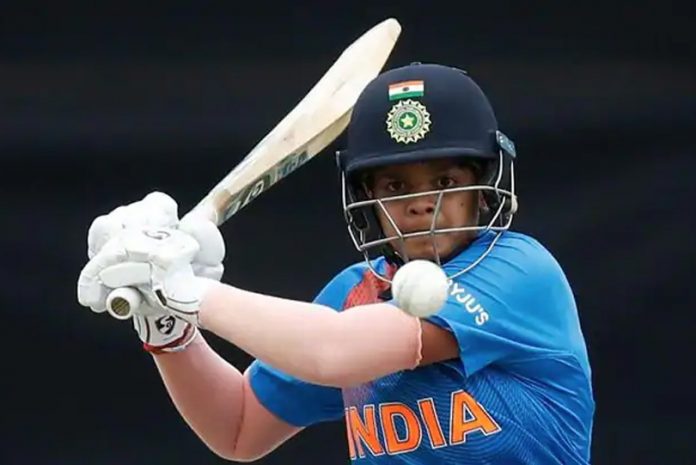 Indian girls have become the first team to qualify for the ICC Women’s T20 World Cup 2020 semi-finals after maintaining perfection with victory over New Zealand. Hosts Australia stay in contention to join the Girls in Blue after beating Bangladesh.

Shafali Verma lit up Melbourne to continue her strong start to the tournament, while five different bowlers took wickets in the tense victory over the White Ferns.

Amelia Kerr had looked like snatching victory for New Zealand but her all-round showing of two wickets and 34 runs fell just short at the Junction Oval.

Attentions then switched to the Manuka Oval in Canberra as Australia piled on the runs and the records, beating Bangladesh by 86 runs for their second Group A win.

The form of 16-year-old Shafali Verma has been a sight to behold in Australia, helping India to their third win of the tournament with a quick-fire 46 atop the order. But once again the wickets tumbled around her, Harmanpreet Kaur and Smriti Mandhana both dismissed early as India stumbled to 133 for eight against the White Ferns.

It seemed under-par but, as they did against the hosts, the bowlers got to work with Poonam Yadav bagging the key wicket of in-form New Zealand captain Sophie Devine. She was hit for 18 in the 19th over by fellow leg-spinner Amelia Kerr – who had earlier taken two for 21 from four overs – but the 19-year-old couldn’t quite haul her side home.

“We’re in a really positive position,” said India’s Tanya Bhatia. “We’ve been playing well ever since the tri-series. I think we’ve got a lot better as a team in working out how to handle and read situations well.

“We’re playing well, it’s just one or two odd games where more of us batters underperform, but I think Shafali is giving us a good start and the rest of us batters will take up responsibility. The results are in our favour but we need to keep up the momentum. If we do that, we will do well and hopefully reach the finals.”

New Zealand’s Katey Martin added: “We are rueing those missed opportunities in the field. We batted really well in the end to get us so close.

“There are some tough chances, but we really need to be taking those. We’ve been making big strides in our fielding and it’s something we normally pride ourselves on.

“We now have a must-win match against Australia in our last game, but before then we’d rather be in a position where we have an opportunity to go through or not. We’re fully focused on our next game against Bangladesh.”

Australia’s top order had yet to fully fire on home soil but they put that to rest with a clinical performance against Bangladesh.

Alyssa Healy (83) and Beth Mooney (81 not out) put on 151 for the opening partnership, the highest for any wicket in Australia’s Women’s T20 World Cup history, with the pair fluent throughout.

Bangladesh offered chances but finally got the breakthrough when Healy fell cutting Salma Khatun, with Ashleigh Gardner’s late burst of 22 not out helping them to 189 for one.

Salma’s side didn’t stop fighting in pursuit of 190, with Nigar Sultana Joty (19) and Fargana Hoque Pinky (36) putting on the second-highest partnership they’ve made in any edition, scoring 50 for the fourth wicket.

But Megan Schutt (three for 21) and Jess Jonassen (two for 17) kept Bangladesh in check as they eventually fell 86 runs short.

“It was good to get such a convincing win on the board,” said Healy. “There’s been a lot of talk about how we’ve been playing, it was nice to put that aside and play the way we wanted to.

“Not knowing much about Bangladesh allowed us to think and concentrate on ourselves.

“At no stage will we stop being aggressive. We spoke as a batting group about not doing our job so putting a score on the board on a low, tricky wicket was pretty great.

“Monday’s a pretty crucial game, we’ll take a lot of confidence out of this win heading into that. There’s been a lot of talk, a lot of pressure on us to perform. New Zealand are a team we’re familiar with and hopefully that will play into our hands.”

Bangladesh’s Fargana Hoque added: “Australia are the world champions and from our side, it was the first time we’d ever played them.

“It was tough to face their bowling but after having the first match, it will give us experience on how to handle the situation in these conditions, which are very new to us.

“I believe if we get a chance to play the top teams on a regular basis, you’ll see us improve.”