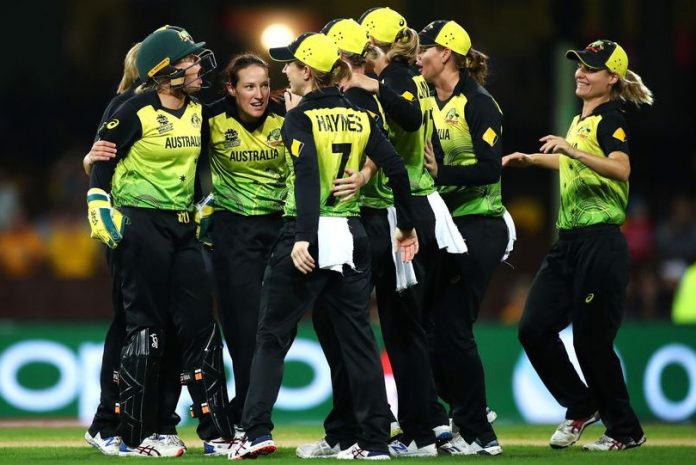 Australia will face India in the ICC Women’s T20 World Cup 2020 final after the hosts came through a nerve-shredding semi-final against South Africa in Sydney today (Thursday).

India had progressed after their semi-final with England was abandoned earlier today.

For Australia, Meg Lanning led from the front to score 49 before taking two brilliant catches in the Proteas’ chase of 98 in 13 overs, adjusted by the DLS method following rain at the SCG.

Dane van Niekerk’s side gave it their all but fell five runs short of a maiden Final, with Australia now just one win away from a fifth Women’s T20 World Cup title.

They’ll face India at the MCG on 8 March – International Women’s Day – after their semi-final against England was abandoned without a ball bowled.

“We’ve had a lot thrown at us this tournament and to be able to come together at a really big moment is certainly special,” said Lanning. “We’ll enjoy the win knowing there’s something massive coming up in the next few days.

“You can never rest and think you’ve got it in the bag, not even with the last few balls. South Africa played really well and took it right to the end.

“We never came into this World Cup thinking it would just happen and it was going to be easy. We knew it was in for a fight and that’s exactly what happened.

“We weren’t owed anything. We’re not here to defend it, we’re here to win it.

“We were confident if we bowled well we would get a result. We had our moments of good and bad but we managed to hold on until the end.”

Ayabonga Khaka broke the partnership on 34 with Van Niekerk snaffling Healy at midwicket, though Mooney and captain Lanning avoided any further damage early on.

South Africa dried up the runs with nearly six overs between boundaries after Mooney’s dismissal, bowled by Nadine de Klerk – playing just her second game of the tournament. She wasn’t done there either, having Ashleigh Gardner caught behind before bowling Rachael Haynes (17) to finish her four overs with three for 19.

Jess Jonassen also fell cheaply as Australia lost three wickets for three runs to sit at 71 for four in the 11th over.

Lanning, who boasts a superb record in T20I knockout cricket, then continued her form to guide the innings with Haynes and then Nicola Carey.

Australia finished on 134 for five but the Proteas’ chase was initially halted by rain, with Van Niekerk and Lizelle Lee preparing for a revised target when the weather relented.

A superb slog sweep from Van Niekerk got them going but when the captain was bowled by a wonderful Megan Schutt (two for 17) in-swinger, her side were 23 for two at the end of four overs.

Lee had earlier fallen in Molineux’s first over of the Women’s T20 World Cup before Mignon du Preez was dismissed by Delissa Kimmince, thanks to a wonderful low catch from Lanning.

It was then up to Sune Luus and Laura Wolvaardt (41 not out) to strive for the 43 needed from 24 balls, with the latter picking up where she left off against Pakistan with some glorious cover drives.

Luus then holed out to long-off off Schutt, while skipper Lanning again took a blinder to dismiss the dangerous Chloe Tryon as South Africa fell agonisingly short of their maiden Final.

“We’ve only been in three knockout games, Australia have been in countless,” said Van Niekerk. “I have to give them credit for getting from where they started the tournament to where they are now. You can never write off the number one team in the world and they showed tonight why they are.

“It comes with experience and confidence. They are the deserved number ones at the moment. I can’t take anything away from anyone. The culture of this team is incredible.I really hope we can get a win over Australia soon. I thought tonight was the night but it wasn’t meant to be. I was really calm when I arrived at the ground. I really hope the final gets the 90,000 people the tournament deserves.”

Never before have India reached the Women’s T20 World Cup Final but their bid for history won’t stop there as they look to upset the four-time champions in Melbourne.

No play was possible in their match with England, with India progressing on account of finishing atop Group A, while Heather Knight’s side were Group B runners-up behind South Africa.

The Final match-up also offers a repeat of the very first game of the tournament, a contest India on to launch their unbeaten campaign and reach the MCG.

“We knew from day one when we were going to start this tournament that we would have to win all our games,” said captain Harmanpreet Kaur.

“If we didn’t get a match, we knew whoever is at the top in the group would play in the Final and that’s how we started.

“We were all ready to play. We all were hoping the rain would stop, these games are very important because everybody was looking to watch.

“We were looking to play because a semi-final against England is a high-quality game and we didn’t want to miss out.”