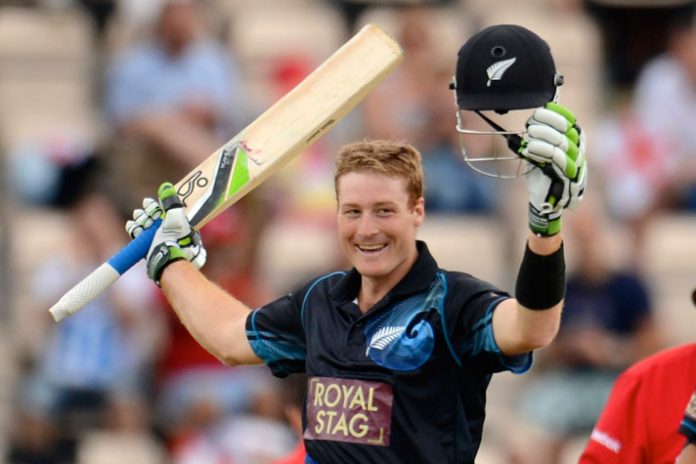 They missed out on a fairy-tale ending in the previous edition but New Zealand will leave no stone unturned to lift their maiden World Cup trophy this time, says their swashbuckling opener Martin Guptill.

New Zealand started the warm-up games with a bang, slaying tournament giants India by six-wickets and 77 balls to spare on Saturday.

“I wouldn’t say we are favourites to win the World Cup this time but we have named a strong squad. We know it’s going to be a tough tournament. We are going to try our best, do everything we can to go and win the trophy we missed out on the last time,” Guptill told PTI.

New Zealand have landed in the UK with an experienced and balanced side and the English pitches are likely to suit big hitters like Guptill, who will be crucial to the team’s success.

The 32-year-old was one of the key members of the team’s best-ever World Cup campaign when they reached their maiden final in the previous edition.

The New Zealand opener was the highest run-getter with 547 runs at an average of 68.37. He also scored an unbeaten 237, the highest individual score at the World Cup, in the quarter-final clash against West Indies. Such performances in big tournaments is what keeps the right-hander pumped and raring to go.

“It was pretty cool to have the second highest score in the World Cup thus far. You always need that kind of confidence going to such a big tournament. I think if you are not confident maybe you probably shouldn’t be turning out. I hope I can continue the form I had last time.”

Guptill also has an impressive record in England. He has scored 652 runs with a strike-rate of 97.31 which includes an unbeaten 189 from 155 balls.

New Zealand, considered perennial dark horses, know how to punch above their weight.

“The tournament (2015 World Cup) was really good for us. We played some really good cricket but unfortunately for us, we played our worst game in the final.”

Asked if New Zealand were a content bunch and lacked that extra oomph needed to succeed in big tournaments, the senior batsman said, “I honestly can’t say. I have been in three semi-finals and we have managed to win only one of them.”

“The one against Sri Lanka in 2011 we just didn’t play well enough, up to our potential on the day and I think that’s probably what’s happened the previous times we have made the semi-finals.”

Many of the players who were part of the 2015 squad have been replaced by youngsters including former captain Brendon McCullum and spinner Daniel Vettori and Guptill feels the team needs to gel well together to achieve results like last edition.

“To be honest, it’s a completely different team and it’s a different time, it’s four years later, so we need to come together and do what we do like last time. We have to make sure everybody is gelling well and are having some fun together because that was the biggest take away from last time.”

New Zealand has had a pretty inconsistent run up to the World Cup. The Kiwis went down narrowly (2-3) to England followed by a 1-1 draw against Pakistan and a 0-3 series win against Sri Lanka. Playing at home they whitewashed Bangladesh 0-3 before losing 1-4 to India. But Guptill is optimistic about his side’s performance.

“You look back over the summer everybody played well, pitched in whenever needed and came into form which is the beauty of our squad, everyone has had some sort of success heading to the World Cup.”

Guptill is coming to World Cup on the back of two international centuries (117 not out, 118) against Bangladesh February. Since then he has only featured in three matches for his Indian Premier League franchise Sunrisers Hyderabad, where he scored 81 runs with a strike rate of 152.83.

“I just tried to get as much batting practice as possible in the nets (in the SRH camp), to make sure I was in the rhythm heading to the World Cup,” he said.