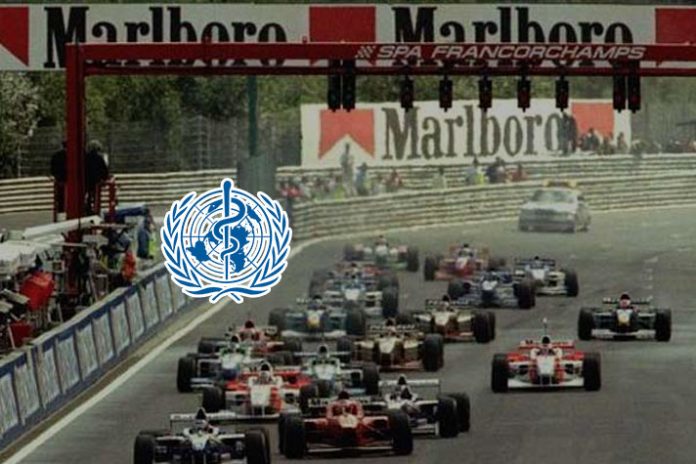 The World Health Organisation, WHO has urged national governments to enforce bans on tobacco advertising, promotion and sponsorship at sporting events, including when hosting or receiving broadcasts of Formula 1 and MotoGP events.

WHO has also urged all sporting bodies, including Formula 1 and MotoGP, to adopt strong tobacco free policies that ensure their events are smoke-free and their activities and participants, including race teams, are not sponsored by tobacco companies.

The WHO’s Tobacco Free Initiative is announced as tobacco companies are establishing new partnerships with motor-racing teams. British American Tobacco (BAT) recently announced “a new global partnership” with the Formula 1 team McLaren using the logo “a better tomorrow”. The BAT will use the sponsorship opportunity to promote its tobacco products.

“Comprehensive bans on  tobacco advertising, promotion and sponsorships are effective in decreasing the consumption of tobacco products. Research shows that some countries have experienced a decline in consumption of up to 16% after the introduction of advertising bans. A study of 22 high-income countries concluded that more comprehensive bans on TAPS reduced tobacco consumption by up to 7.4%. However, partial bans have limited effect since when one form of TAPS is banned, the tobacco industry simply shifts expenditures to more indirect forms of TAPS in order to circumvent restrictions,” states WHO.

According to WHO, the tobacco industry spends tens of billions of dollars worldwide each year on advertising, promotion and sponsorship. A total ban on direct and indirect advertising, promotion and sponsorship, can substantially reduce tobacco consumption and protect people, particularly youths, from industry marketing tactics. To be effective, bans must be complete and apply to all marketing categories. Otherwise, the industry merely redirects resources to nonregulated marketing channels. The tobacco industry strongly opposes such comprehensive bans because they are effective in reducing tobacco use.

In the case of Philip Morris International (PMI), the company has created a new logo (Mission Winnow) to be carried by Ferrari on cars, and Ducati on motorbikes, that previously carried branding for the cigarette brand Marlboro. PMI has also registered the Mission Winnow logo as a trademark, including for use with respect to tobacco products. Ducati carried this branding at a recent MotoGP.

WHO urges governments to implement their domestic laws banning tobacco advertising, promotion and sponsorship in the strongest possible ways. This may include issuing penalties applicable under domestic laws and taking preventative action, such as by preventing screening of events that violate domestic laws.