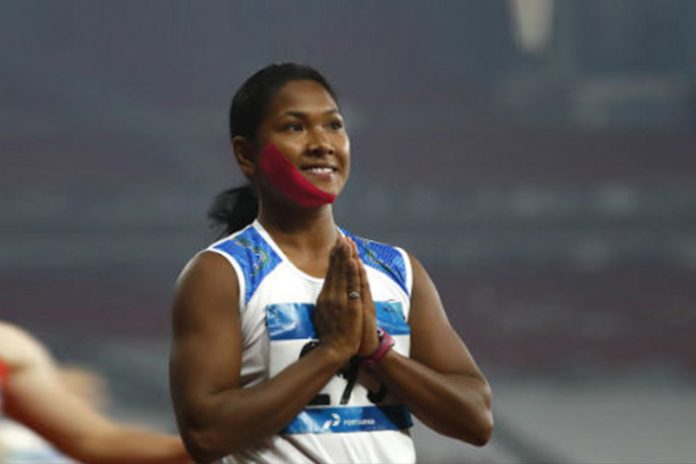 “The CM announced a cash award of Rs 10 lakh and a government job for Swapna. The minister (Deb) spent about half an hour at Swapna’s house, and also assured them full support,” Maitra said.

Swapna is likely to return around September 3-4 and the WBAA are also planning to felicitate the golden girl from Jalpaiguri, Maitra added.

The 21-year-old from Jalpaiguri scripted history in Jakarta when she achieved her personal best score of 6026 points in the seven-event competition to earn India a first heptathlon gold in Asian Games.

Wishes poured in from all quarters including Bengal icon Sourav Ganguly, who congratulated Swapna on his official Twitter handle.

“Congratulations to Swapna Burman @Swapna_Barman96 ..for her gold ..we in India and Bengal are so happy and proud,” Ganguly wrote.

Swapna is yet another story in Indian Olympic sports that has seen her battle poverty and physical difficulty to run with ill-fitting shoes that always pinch the six toes on each of her feet.

One of the four children of her parents, her story is a story of survival.

Her father Panchanan Barman pulled rickshaw van till a stroke forced him to stay at home, while mother Basana Devi worked as a maid and plucked leaves in tea garden.

Seeing his youngest daughter Swapna’s interest in sport, her father Panchanan Barman, used to fix bamboo sticks on the field in the backyard of his tin-roofed house for her to practice high jump.

After returning from school, Swapna used to practice there and that’s how her journey from Jalpaiguri to Jakarta began for her.

The family income was too meagre and there was no infrastructure for athletics but the biggest challenge was poverty.

Her mother Basana Devi used to encourage her after noticing her win the first prize in high jump among all the primary school.

To ensure that Swapna did not miss out on her practice, her mother used to drop her to Jalpaiguri Sports Complex ground.

Her brother, Asit Barman said Swapna had left SAI camp hostel in 2015 never to return to the athletics track, but her coach Subhas Sarkar dissuaded her from doing so and stood like a pillar of strength.