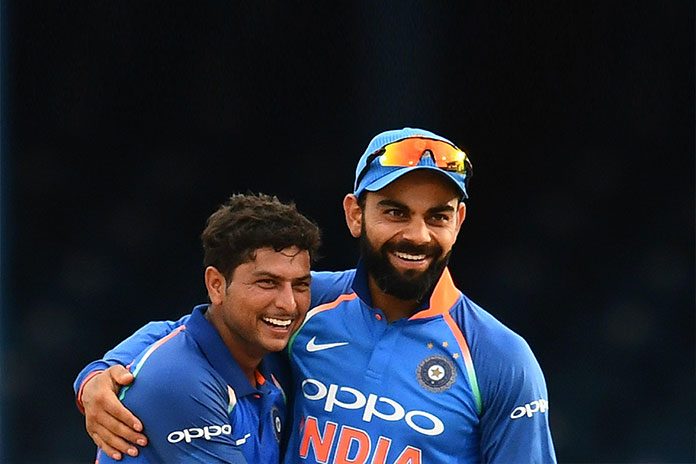 India captain Virat Kohli is tempted to play his ‘key weapons’ Kuldeep Yadav and Yuzvendra Chahal in the upcoming five-Test series against England, considering the wrists spinners’ stellar performance in the ongoing limited overs leg of the tour.

While Kuldeep has already played two Tests, Chahal is yet to earn the coveted cap in the longest version of the game.

“Anything is possible with the selections for Tests and there might be a few surprises. Kuldeep is making a strong case for himself and so is Chahal. And looking at the way, the English batsmen have struggled against them, we might be tempted to do it,” said Kohli after India’s emphatic win in the opening ODI yesterday.

“But the focus now is winning the next two games. Especially the next game, looking at it from the series perspective. The weather has been lovely. It has been very welcoming. The crowd support has been brilliant. The tour is really long and there is some tough cricket ahead of us which we are looking forward to,” the skipper added.

Kuldeep especially has been lethal both in the T20s and now ODIs. In the opening ODI, he set up a comprehensive win with a career-best six for 25. The English batsmen have failed to pick him and he has already amassed 18 wickets on the tour including the two T20s against Ireland.

Both Kuldeep and Chahal have grabbed the opportunities with both hands ever since they were preferred over the experience duo of Ravichandran Ashwin and Ravindra Jadeja in the shorter formats of the game.

As Kohli hinted, the wrist-spinners might get a go in the five-day format as well, starting with the England series.

Kohli praised Kuldeep as well as vice-captain Rohit Sharma, who scored an unbeaten 137.

“Those wrist spinners in the middle overs are going to be tricky. Given more overs and more time in the middle, they become even more lethal. Kuldeep was outstanding. To give away 25 runs and pick up 6 wickets on that kind of a wicket, I don’t think I have seen a better spell of bowling in ODIs of late.

“After that, Rohit batted very long and finished the game for us. We made a tactical decision (at Bristol) looking at the dimensions of the ground and the breeze flowing into the shorter boundary.

“When it comes to longer game, you need players to make an impact. These two wrist spinners have been making the difference since they have come in. They did it in South Africa in the middle overs. They remain as our key weapons,” Kohli added.

England captain Eoin Morgan said his team will have to improve against Indian spinners if it has to bounce back in the series.

“Playing spin against India is one challenge that hopefully we will keep improving upon. But today we were well off the mark. I think both the games there has been more turn than on the grounds that we have played on and that is one thing probably that we have identified,” said Morgan.

“I think Lord’s (second ODI) will be different as it won’t offer a great deal of turn. But certainly, he (Kuldeep) extracted more turn out of this than any other spinner. We need to improve as a side. The seamers on this wicket come on to the bat and hence the high scoring nature of the ground. We need to expose our areas of weakness before the World Cup and this seems to be one of them,” he added.

Kohli should bat at number four in ODIs, says Ganguly