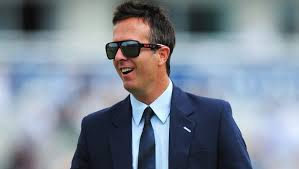 After an action-packed Day 3 of the #raisethebat decider in Manchester, fans and players were all upbeat for Day 4’s play. However, with the English weather showing its true colours, Manchester on Monday morning became a victim to heavy showers.

While the umpires signalled a delay in start, it also implied that Stuart Broad has to wait some more to reach his 500 Test wickets milestone. With the weather and the moods in Manchester being overcast, former England skipper Michael Vaughan did an illustrious mimicry of the incessant rain pouring over Old Trafford to provide a moment of comic relief.

Earlier, Chasing 399 for a win, Campbell opened along with Kemar Roach, who was supposed to play the role of a nightwatchman. But Stuart Broad once again poured water over their plans, as he single-handedly dismissed the duo. Windies finished the day at 10/2, needing 389 runs more for a win.

Stuart Broad dominated as he picked up 6 wickets on Day 3 to bundle out to visitors for 197. Broad, whose quickfire 62 off 45 propelled England to a first-innings total of 369, stunned with the ball as the West Indies batsmen were left just mere spectators.