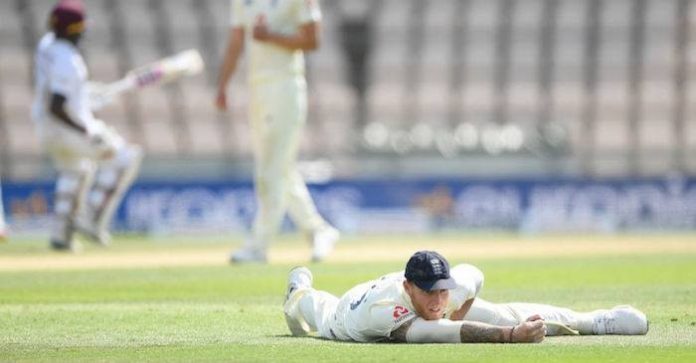 Ben Stokes, who is heralded as one of the greatest all-rounders in recent times, gave a testament of his lofty repute in the second Test against West Indies in Manchester.

From his stellar performances in the World Cup in 2019 and his Ashes heroics later in the year, it seems that there is nothing on the cricket pitch that Ben Stokes can’t do. It was this determination and commitment that was on show on the final day of England’s must-win second Test against West Indies.

In the first delivery of the 43rd over of West Indies second innings, Stokes bowled one short of good length to Blackwood and the batsman punched it back down the ground. With no fielder there, Stokes gave chase and dove to stop the ball from crossing the line.

And there is Ben Stokes' idea of commitment.

Three deliveries later, Stokes claimed Blackwood’s wicket, and with Shane Dowrich falling to Chris Woakes in the next over, West Indies’ resistance came to an end, with England eventually cleaning them out for 198 and claiming a 113-run victory to level the series.
Ben Stokes was declared man-of-the-match for his brilliant performance in the match, and he rose to the top of ICC Test rankings for all-rounders, while moving to third among batsmen, behind just Australia’s Steve Smith and India captain Virat Kohli.

Stokes has been in incredible form across formats, and has seen a meteoric rise in ICC rankings, especially in Test cricket. Apart from posting the big scores and picking up key wickets when England needs them most, Stokes also shows amazing commitment and athleticism on the field, giving his all to save every possible run and take every possible catch.