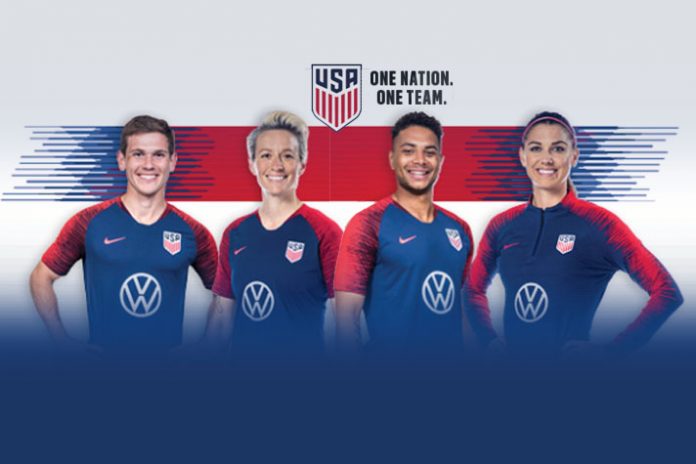 Volkswagen USA has inked a record eight figure deal in American dollars to become the first ever presenting sponsor of the US Soccer.

The United States Soccer Federation (US Soccer) has claimed the deal as a momentous day in the history on the road to fulfilling its mission of making football the preeminent sport in the United States.

The announcement at the Detroit Auto Show that Volkswagen and U.S. Soccer have agreed to a unique multi-year presenting partnership gives the Federation new platforms to continue to weave football deeply into the American culture.

A significant part of the new resources afforded to U.S. Soccer by Volkswagen will go towards helping to educate coaches, especially female coaches, at various levels of the coaching certification process. With more programs and more resources, U.S. Soccer can accelerate implementation and impact more people who can make positive contributions to the overall development of the game, the US Soccer Federation has reported on its official website.

In addition, the promotional partnerships and dealer network that Volkswagen brings will allow US Soccer to expand its overall reach and continue to be a driver for the sport, increasing the ability to assist in the development of players, coaches, referees and administrators, as more and more fans become engaged in the world’s sport. Reaching more devoted fans and stirring the passion of new ones while growing the game together are all important aspects of what this partnership will help provide.

Volkswagen will be one of the most active – and visible – partners US Soccer has ever had, increasing the ability to reach the grassroots customer directly while fostering excitement of what’s to come for soccer in the USA.

“We are extremely excited to work together with Volkswagen to help us continue to grow soccer in the United States,” said US Soccer CEO and Secretary-General Dan Flynn. “Volkswagen will be one of the most active and visible partners US Soccer has ever had, providing us with additional resources for more programs that can impact and help develop the sport, while also allowing us to reach more fans of the game across the country. We look forward to the next four years together as we drive towards our mission of becoming the preeminent sport in the United States.”

The Volkswagen logo appearing on the front of the training jerseys provides a unique asset that will be especially conspicuous over the next few years with the US Women embarking on the 10-game “Countdown to the Cup” before participating in the World Cup this summer and then attempting to qualify for the Olympics in 2020. The U.S. Men will be racing towards another Concacaf Gold Cup crown in June before entering its first Concacaf Nations League competition in the fall, and then of course, there will be the quest to qualify for the 2022 World Cup.

The historic eight-figure deal, the largest for US Soccer aside from its partnership with Nike, will also feature Volkswagen becoming the title sponsor for the Tournament of Nations, the elite four-team summer tournament for the U.S. Women’s National Team that will return in 2021 and 2022.

The journey of soccer in the United States has been a long one, but with the new presenting partnership with Volkswagen, U.S. Soccer is now better equipped to shift into high gear on a road to soccer pre-eminence that just became smoother and certainly more fun to navigate.