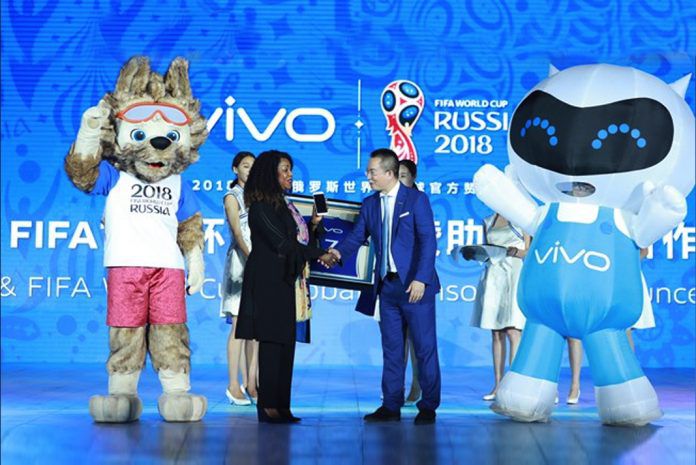 The announcement was made in Beijing on Wednesday. Vivo Executive Vice-President Ni Xudong and FIFA Secretary General Fatma Samoura were present to make the announcement.

The Vivo logo will appear on pitch advertising boards, match tickets, media releases and other key promotional platforms during every match. The agreement includes special marketing activations such as the right to select guests to be a Vivo phone photographer during pre-match player warm-ups. Vivo will also have the right to introduce a customised FIFA World Cup™ phone.

“Football and technology are coming closer by the day, on and off the pitch, and it is a great moment to start a partnership of this nature with the leading global smartphone brand. We are very excited to be working closely with Vivo and keen to see their involvement in the next editions of the FIFA World Cup and FIFA Confederations Cup,” says Fatma Samoura.

Vivo becomes FIFA’s 12th sponsor for the 2018 World Cup. Before the previous tournament in Brazil, the organisation had 20 corporate partners on board. The deals helped pay for the $2bn (Rs 12,000 crore) cost of running the event.

Vivo’s previous involvement in sport includes the title sponsorships of the Indian Premier League and Pro Kabaddi League, besides a strategic partnership with the NBA to become NBA China’s official mobile handset sponsor.

The deal will also help Vivo, world’s fifth-biggest mobile phones seller with 77.3m units in 2016 across its strong base in Asia, to launch products in Europe and North America.

“Football is a sport full of passion and moments of wonder, creating happiness for millions of people. The spirit of football is about constant progress. As a global sponsor of the FIFA World Cup, Vivo hopes to strongly associate itself with the football spirit and show consumers all over the world Vivo’s creative, joyful and international brand image. In the meantime, Vivo will bring more personalised, energetic and youthful elements to the FIFA World Cup experience and the game of football,” said Ni Xudong.

FIFA has been struggling to secure new commercial partners before next year’s World Cup in Russia. It lost several big sponsors, including Sony and Emirates, when their contracts expired following the 2014 edition.