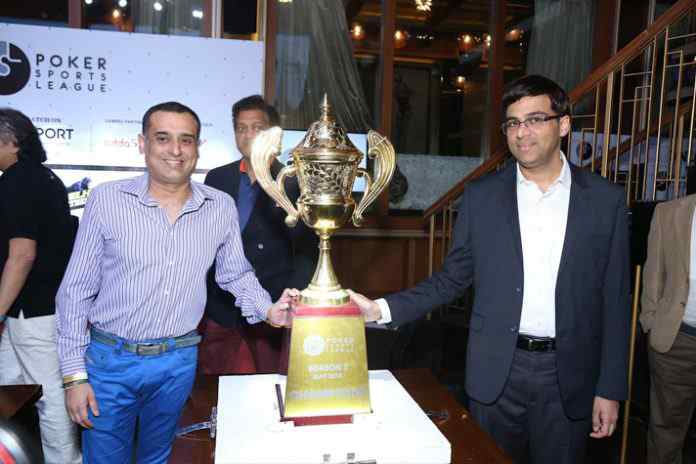 Anand has helped bring in a fresh perspective to the paradigm by getting the conversation rolling which is ascertaining the debate around the game of chance & game of skill when it comes to Poker. His involvement with the league and the sport has brought in credibility to the game, which is widely misunderstood as gambling. This undoubtedly fairs to be the “biggest move ever” made by any brand in the history of Poker, the PSL organisers have stated in a Press release.

“The whole idea of my association with the league lies in the fact that I find poker no different from chess and through this alliance, we are hopeful that we are able to give the sport the long due prominence and acceptance. The sport has been internationally acknowledged and recognised and Poker Sports League is an attempt to furnish a platform for the immense poker talent we have in the country,” Anand said at Press conference it the Capital.

In yet another first in India, the PSL has granted Discovery Networks India the exclusive media rights to broadcast the second edition of the league on DSport.

“Poker Sports League Season 2 has an exciting line up of players and we are certain that like last time, we will be able to execute it at par with any international format. We have announced 11 teams,” said Amit Burman.

The PSL Season 2 is scheduled from May 9 to May 13 in Goa. Eleven city-based teams from across the country will compete for ₹3.60 crore prize money. The teams will consist of a total of 10 players each, comprising of one mentor/ playing captain, two pro-players, two from free live qualifiers, three from free online qualifiers and two wild-card entries.

All 11 teams & owners collectively chose their players through a snake drafting process and announced their wild cards. Mentors were selected by the teams, from amongst the biggest names in the poker industry. All PSL tourneys were free of cost & began with the selection of 2 Professional Players, after an intricate examination of applications submitted with their highest achievements for the past 3 years. Post that 2 players were chosen from Live Qualifiers basis their performance in the live poker tournaments hosted by PSL across India. This was followed by 3 players being chosen from online qualifiers hosted on adda52.com. Both live and online qualifiers were held over a span of 3 months.