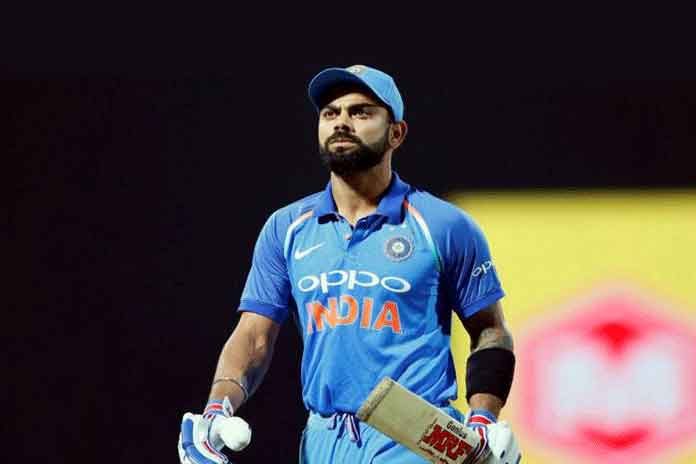 Virat Kohli has it made a habit to not settle for anything less than the No. 1 position. The run machine has conversions with a consistency second to none other in his profession. In blue flannels, facing the white ball Kohli scaled yet another peak to leave the icons behind who have graced the sport.

In the second one-day international against the West Indies at Visakhapatnam on Wednesday, Kohli cruised past the ODI 10,000-run mark to accomplish a feat his predecessor Sachin Tendulkar will be proud of. In reaching the 10,000 ODI run mark, Kohli also became the fastest player to accomplish the feat in 205 innings. Bettering Tendulkar’s 10,000 runs in 259 innings. The 37th ODI career hundred was a perfect icing on the cake.

Being the No. 1 has become a habit for this ‘Don of Delhi’ – who has also surpassed milestone 8,000 and 9,000 in lesser innings than any other player.

Being No. 1 has been the hallmark of this consistent cricketer. For the second consecutive year, Kohli is not just the No 1. but also the only cricketer in Forbes’ Top 100 Highest Paid athletes list. He ranks at the top in earnings from endorsement deals and match fee for playing international and domestic cricket and his Indian Premier League ₹ 17 crore contract with Royal Challengers Bangalore.

Also Read: Kohli Number 1: Not just in Tests and ODIs rankings, see where else Virat…

Incidentally, his ₹ 17 crore deal is also the highest ever annual IPL contract for a player.

His top of the tops list is decorated with him being the most followed cricketer and Indian athlete on social media. The latest Hookit ratings have placed Virat at the No. 1 cricketer for social media interactions during the ratings period. He is matching the likes of Cristiano Ronaldo and the table topper esports internet sensation Richard Tyler Blevins.

He happens to be the only cricketer to ink two ₹ 100 crore endorsement deals – with Puma and MRF. He is the No. 1 batsman on International Cricket Council’s rankings charts.

If Tendulkar gave his era’s best spinner Shane Warne nightmares with his “desert storm”, fellow players find “Kohli to be inhuman with his consistency” that invokes the assurance of a century every time he steps out on the oval with the willow in his hand.

The journey is going on and like a seasoned wine he is adding more value to his trait with every passing day.

Also Read: This is what Vinesh Phogat will have in common with Virat Kohli