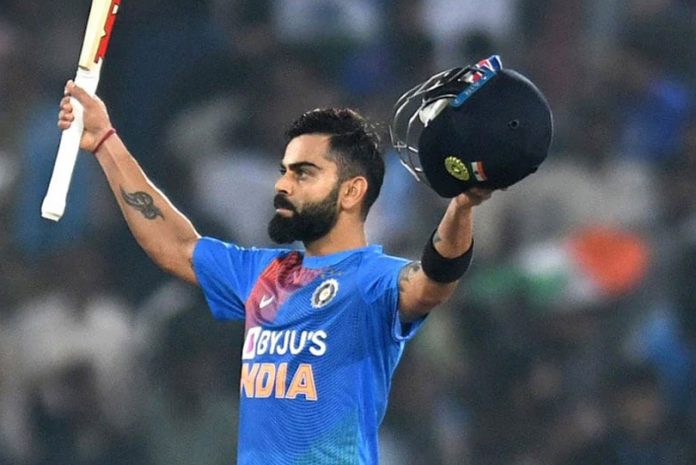 Virat Kohli is the most prominent name in the sports industry and undeniably the most popular cricketer in the World.He is truly a global icon today. Kohli draws attention from every quarter. From fans to the media everyone wants to know about him.

Virat Kohli is an Indian cricketer who currently captains the India national team. A right-handed top-order batsman, Kohli is regarded as one of the best batsmen in the world. He plays for Royal Challengers Bangalore in the Indian Premier League, and has been the team’s captain since 2013.

1 Virat Kohli Nickname – Virat Kohli nickname is Cheeku. Former Delhi coach Ajit Chaudhary gave him the name when he joined the Delhi Ranji team
2 Virat Kohli Height – 1.75 m
3 Virat Kohli Date of Birth –  5 November 1988
4 Virat Kohli Weight: 69 kg
5 Virat Kohli Spouse: Anushka Sharma (m. 2017) Kohli started dating Bollywood actress Anushka Sharma in 2013; the couple soon earned the celebrity couple nickname “Virushka”.Their relationship attracted substantial media attention, with persistent rumours and speculations in the media, as neither of the two publicly talked about it.The couple married on 11 December 2017 in a private ceremony in Florence, Italy.
Kohli has admitted that he is superstitious. He used to wear black wristbands as a cricket superstition; earlier, he used to wear the same pair of gloves with which he had “been scoring”. Apart from a religious black thread, he has also been wearing a kara on his right arm since 2012
6 Virat Kohli Education: Vishal Bharti Public School
7 Virat Kohli favourite sport Other than Cricket:  According to Kohli, football is his second favourite sport.
In 2014, Kohli became a co-owner of Indian Super League club FC Goa. He stated that he invested in the club with the “keenness of football” and because he “wanted football to grow in India”.[343] He added, “It’s a business venture for me for the future. Cricket’s not going to last forever and I’m keeping all my options open after retirement.”

In November 2014, Kohli and Anjana Reddy’s Universal Sportsbiz (USPL) launched a youth fashion brand WROGN. The brand started to produce men’s casual wear clothing in 2015 and has tied up with Myntra and Shopper’s Stop. In late 2014, Kohli was announced as a shareholder and brand ambassador of the social networking venture ‘Sport Convo’ based in London.

In 2015, Kohli invested ₹900 million (US$13 million) to start a chain of gyms and fitness centres across the country. Launched under the name Chisel, the chain of gyms is jointly owned by Kohli, Chisel India and CSE (Cornerstone Sport and Entertainment), the agency which manages Kohli’s commercial interests. In 2016, Kohli started Stepathlon Kids, a children fitness venture, in partnership with Stepathlon Lifestyle.

8 Virat Kohli Charity foundation: In March 2013, Kohli started a charity foundation called Virat Kohli Foundation (VKF). The organisation aims at helping underprivileged kids and conducts events to raise funds for the charity.[364] According to Kohli, the foundation works with select NGOs to “create awareness, seek support and raise funds for the various causes they endorse and the philanthropic work they engage in.”[365] In May 2014, eBay and Save the Children India conducted a charity auction with VKF, with its proceeds benefiting the education and healthcare of underprivileged children.[366]

Kohli has captained the All Heart Football Club, owned by VKF, in charity football matches against All Stars Football Club, owned by Abhishek Bachchan’s Playing for Humanity. The matches, known as “Celebrity Clasico”, feature cricketers playing for All Heart and Bollywood actors in the All Stars team, and are organized to generate funds for the two charity foundations.

Virat kohli (Run Machine) is the 3rd highest earning IPL player. Virat kohli has earned a total of ₹ 126.2 crores in salaries over 13 years in his IPL journey
Virat Kohli was retained by the Royal Challengers Bangalore (RCB) team for ₹ 17 crores in IPL 2020, a 14000% jump from the inaugural season salary of ₹12 L.
Virat is the new-age cricketer who is aggressive and expresses his mind on the field. In 2008, Kohli was inducted in the RCB squad and started leading the side in the year 2013. In the year 2016, he sat atop on the leading run-scorers list, thereby donning the Orange Cap at the end of the ninth edition of the league. The highest paid cricketer in IPL, ViratKohli was the first one to be retained by his franchise ahead of the IPL 2018 Player Auction and will continue to lead his side.
IPL 2020 Salary – 17 Cr
IPL Moneyball Rank – 3
IPL Total Moneyball Salary – 126.2 Crores
IPL 2020 Team – Mumbai Indians (MI)
IPL Runs – 5412
The above analysis was done using InsideSport’s Moneyball, a tool to calculate professional salaries of the Indian sports and Indian sports-stars.