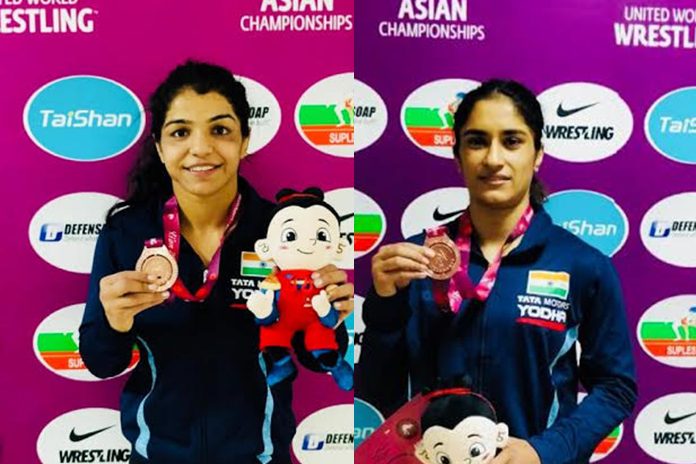 Despite fighting in a new category, Asian Games gold medallist Vinesh Phogat’s quest for a medal was successful as she clinched the bronze in 53kg at the Asian Wrestling Championships 2019 in Xi’an, China on Friday. Rio Olympic bronze medallist Sakshi Malik (62kg) clinched India’s second bronze of the day to help the Indian women grapplers end campaign with four bronze.

Vinesh, who won the 2018 Commonwealth and Asian Games gold in 50kg, decided to move up to 53kg ahead of Tokyo 2020 Olympics. Even though the 24-year-old lost her quarter-final bout to Japan’s Mayu Mukaida 0-10 by technical superiority verdict, she did get to play the repechage after Mukaida advanced to the final.

Vinesh made the most of her second chance by beating Jo Cih Chiu of Taipei 6-0. In the bronze medal play-off, she avenged her UWW Dan Kolov-Nikola Petrov tournament final loss last month by prevailing over Qianyu Pang of China 8-1.

“I was competing in 53kg at the Asian Championships after a long time. It would have been good to change the colour of the medal. Nevertheless I am happy with the bronze especially after having been able to turn the tables on Pang this time,” said Vinesh following the bout.

In a tight match in 62kg, Sakshi claimed the bronze with a 9-6 win over Hyon Gyong Mun of North Korea. After defeating Thi My Hanh Nguyen in the qualification, Sakshi was beaten 0-5 in a Victory by Fall verdict that went in favour of Japan’s Yukako Kawai. With the Japanese reaching the final, Sakshi played the repechage where she stamped her authority over Korea’s Jiae Choi 11-0 to make it to the bronze medal play-off.

“Happy to have defended my medal from last year, although I wish I could have done better. This is a confidence booster and will motivate me to strive harder for the upcoming tournaments as I am the World Championships, later in the year,” said Sakshi after her medal.

Pooja Dhanda (57kg) and Navjot Kaur (65kg) weren’t as lucky as they lost their respective semi-final contests to return empty-handed. A year after making history as the first Indian woman to win a gold at the Asian Wrestling Championships, Kaur was blanked 0-7 by Aina Temirtassova of Kazakhstan in the bronze medal play-off.

China’s Xiaojuan Luo, the eventual gold medallist, had proved too strong for the Indian in the quarters where Luo was a runaway 12-1 winner by Technical Superiority.

2018 World Championships bronze medallist Pooja Dhanda too came up short in the bronze medal bout. In a nail-biting contest that tested both the wrestlers’ stamina, former world champion Tserenchimed Sukhee of Mongolia edged Dhanda 5-3 to take the medal.

The Haryana girl had earlier started her challenge with a 10-0 thumping of Sevara Eshmuratova and then carried that form into the last-eight clash to beat Emma Tissina 7-3. In the semi-finals, she endured a 4-8 defeat to eventual champion Ningning Rong.

Kiran was the only Indian who was not in contention for a medal after losing her 72kg quarter-final 4-7 to Zhamila Bakbergenova of Kazakhstan.

With Divya Kakran (68kg) and Manju Kumari (59kg) winning bronze medals on Thursday, the women’s wrestling competition came to an end with India winning a total of four bronze medals.