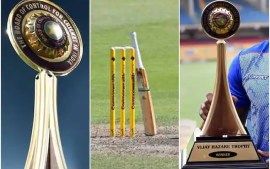 Vijay Hazare Trophy 2022: UP vs Mumbai, Karnataka vs Jharkhand, J&K vs… 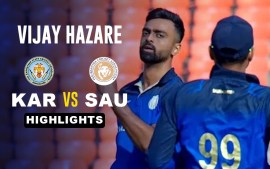 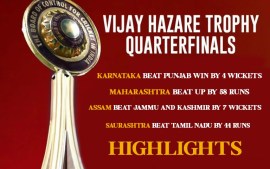 Vijay Hazare Trophy Quarterfinals Schedule and Live Streaming details: The premier domestic competition of India has got its 7 Quarterfinalists with Mumbai,…

Vijay Hazare 2021 Format & Other Details
This season’s format has the top-placed teams of the five Elite division groups qualifying automatically, alongside the top two teams on points from a combined Elite division table. Mumbai won their last Group D game by 200 runs against Himachal Pradesh to finish top with five wins in five games, while Saurashtra stayed on top of Group E with 16 points despite their first loss of the season to Services.

For the other two automatic qualification spots, the teams in contention were UP and Kerala (both from Group C with 16 points), Baroda (Group A, 16 points) and Delhi (Group D, 16 points). Baroda lost out to Delhi on net run-rate, while UP’s and Kerala’s vastly superior NRRs ensured they qualified as the sixth- and seventh-placed teams.
The Plate division, which plays as one group, had two teams – Uttarakhand and Assam – finish with five wins in five games. But Uttarakhand’s NRR in excess of +3 was far too much for Assam to better on the final day of the league stage. As a result, it will be Uttarakhand who play Delhi for the last quarter-final spot.