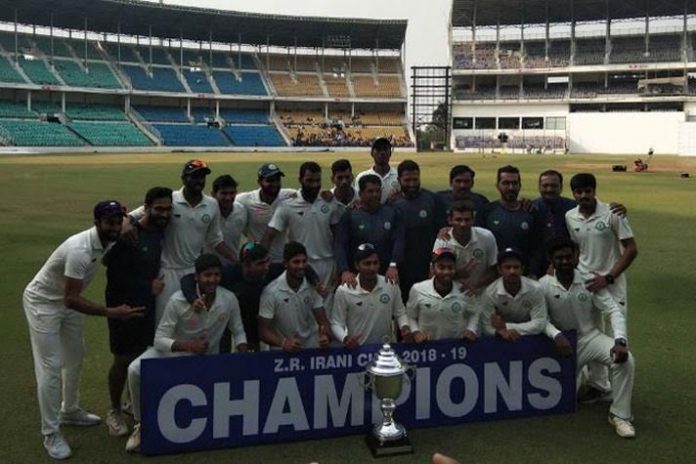 When terror struck the convoy of Army Jawans in Pulwama, Jammu and Kashmir, a bunch of country’s promising cricketers was playing the Irani Cup competition hundreds of miles away in Nagpur, Maharashtra.

The EID blasts stopped 42 lives. The game went on. Sounds cruel. But even while engaged in the intense battle, players heart kept beating for those who had laid their lives on the line of duty. The Martyrs and their families might have been out of the sight for the boys on the field, but they were never out of their mind.

As Vidarbha retained the Irani Cup on first innings lead in the drawn game, they did not just dedicate the win to the martyrs. The gesture was bigger. The champion team has decided to donate their prize money along with “personal contributions” for the welfare of the martyrs’ families. A noble way to remember the departed, brave souls.

BCCI had shared the video clip of Fazal’s post-match interview on its Twitter handle @BCCIdomestic. “Vidarbha are proving why they are champions on an off the field. The #IraniTrophy winners led by @faizfazal have decided to hand over their prize money to family members of martyrs of #PulwamaTerroristAttack,” read the text with the BCCI tweet.

Vidarbha are proving why they are champions on an off the field. The #IraniTrophy winners led by @faizfazal have decided to hand over their prize money to family members of martyrs of #PulwamaTerroristAttack. pic.twitter.com/Rh6i44nXrI

The team will get ₹ 10 prize for retaining the Irani Cup.

On Thursday, 42 CRPF Jawans had lost their lives in a terrorist attack in the Pulwama district of Jammy and Kashmir.

Meanwhile, boxer Vijender Singh has also announced to contribute his one month’s salary. He is a Haryana Police Services cadre officer.