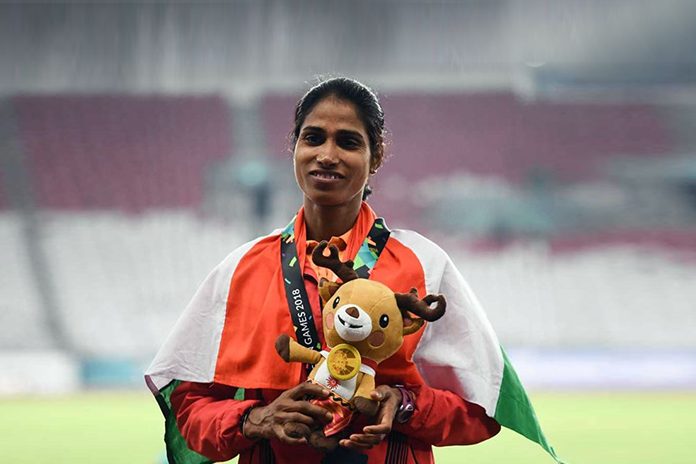 Asian Games silver-medallist Sudha Singh has been offered a job by the Uttar Pradesh government. The veteran long distance runner is not too excited about the offer, which she just termed as “better late than never”.

“I am neither happy nor unhappy with the decision. I should have got the job earlier. My file for the job through sports quota has been there since 2014. It’s better late than never,” Sudha said.

The 32-year-old Sudha, who won a silver in women’s 3000m steeplechase in the Asian Games yesterday (Monday), was reacting to the recent announcement of Chief Minister Yogi Adityanath offering her a gazetted post in the State government.

“I have won gold and silver in Asian Games (in 2010). I participated in Olympics, have won medals in Asian Championships and World Championships. I have got Arjun Award also. I want to work in the Sports Department and I am eligible for becoming a Deputy Director in the sports department,” she said.

“I want to thank the CM but he might not be aware that my file was pending in the government for past four years. I will only work in Sports Department and not in any other department,” she said.

The CM yesterday announced ₹30 lakh and gazetted officer’s job to Sudha, who hails from Rae Bareli district, about 80 km from the state capital.

Sudha’s brother Pravesh Narain Singh said, “Despite the eligibility, she had to face humiliation by the Government as she was not given a job. She was hurt and is presently working with Central Railways since 2005.”

In a government order of 2015, those winning medals at Olympics and Asian Games are eligible for government jobs, but it was not followed in Sudha’s case. “She tried to meet the then CM Akhilesh Yadav in 2016 thrice but could not succeed. Due to this, she could not perform well in 2016 Olympics,” Pravesh added.