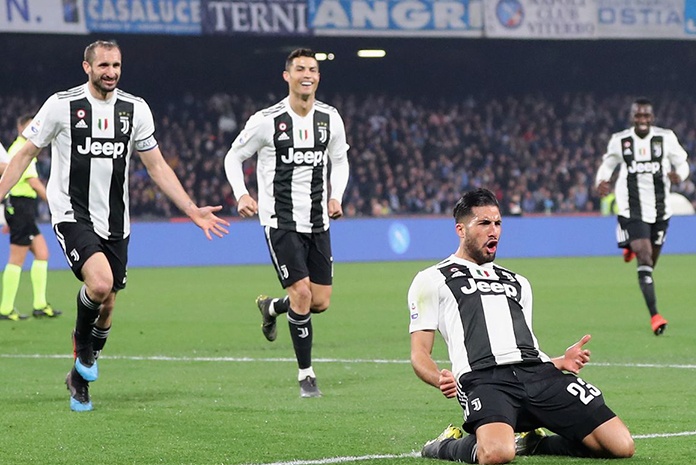 Lyon survived a Cristiano Ronaldo-inspired comeback from Juventus to hang on and book a Champions League quarter-final against Manchester City.

Leading 1-0 from February’s first leg, the French side were handed a soft early penalty which Memphis Depay converted in style.

That left Juventus needing to score three times to progress and Ronaldo got one back from the penalty spot.

He then thundered in his 130th Champions League goal but Lyon held on.

UEFA Champions League: Lyon knocks out Juventus to meet Manchesters City in Last 8
Lyon boss Rudi Garcia, said: “We came up against an opponent who has an extraterrestrial in its squad,” of five-time Ballon d’Or winner Ronaldo.

“This is the victory of a group. We wanted to be in the final eight in Lisbon, we are there.

“We’ll still be outsiders and that suits us very well.”

After both sides converted contentious penalties in the first half, Ronaldo struck from out of the blue on the hour but Lyon clung on for a 2-2 aggregate draw which sent the side to next week’s final-eight tournament in Lisbon. It will meet Manchester City in a one-legged quarterfinal.

Juventus manager Maurizio Sarri may have guided his side to a ninth straight Serie A title but they were lethargic throughout and his position could be under threat.

Juve have not won the Champions League since 1996 and the wait goes on at least another year.

It was an uphill struggle for Juve from the moment it conceded an away goal in the 12th minute, albeit in controversial circumstances.

Rodrigo Bentancur appeared to get the ball cleanly off Houssem Aouar but referee Felix Zwayer pointed to the spot and chose not to look at the incident on the pitchside monitor. Dempay converted with a cheeky panenka-style penalty which sent GOALKEEPER the wrong way.

Ronaldo saw a free kick palmed away by Anthony Lopes but it was another controversial penalty which provided the hosts with their equaliser.

Miralem Pjanic’s free-kick struck Depay’s elbow in the wall and, although his arm was close to his body, the referee gave another penalty, again without consulting the pitchside monitor. Ronaldo converted it.

Juventus seemed to be making little progress after halftime until Ronaldo found space for a shot and blasted the ball past Lopes from 25 metres on the hour.

After that, it almost became a one-man show by Ronaldo as he set up a chance which Gonzalo Higuain headed over. The Portuguese star then headed over one himself and drilled a free kick into the wall. But even he could not find the winner.