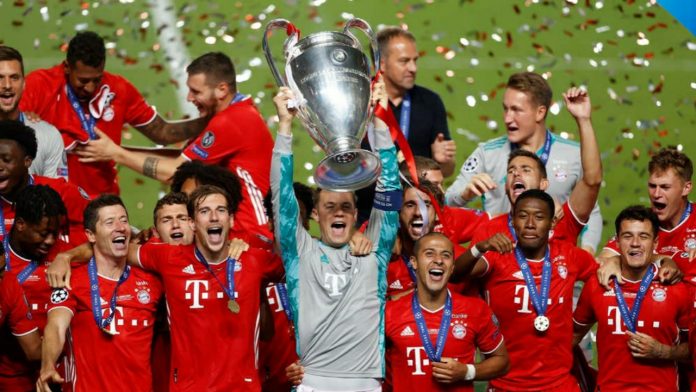 Bayern Munich were crowned the champions of Europe for a sixth time in history when they defeated first-time finalists Paris Saint-Germain 1-0 in the UEFA Champions League final at the Estadio da Luz, Lisbon on Sunday.

Hansi Flick’s Bayern Munich made it 11 out of 11 in the competitions this season, becoming the first team ever to do so, as a 59th minute Kingsley Coman header proved to be the difference in a high-octane, albeit low scoring, final.

Robert Lewandowski was denied twice in the first half — one from a close-range header and another a right-footed strike to the post. PSG threatened too through Neymar and Kylian Mbappe as both the forwards were denied by the gigantic Manuel Neuer. In the second half, Bayern completely dominated the possession and they reaped rewards soon when an accurate Joshua Kimmich cross was put in the back of the net by the former PSG forward, Coman. PSG tried to get an equaliser, but Bayern didn’t slip up even once till the very end.

The pre-match prediction had been for a high-scoring encounter but with the stakes so high, there were understandable nerves and, as the minutes ticked down, the realisation that one error could prove decisive.

The breakthrough, though, owed more to a burst of Bayern slickness. It was a wonderful team goal, with Joshua Kimmich central to its creation. He fired the move with a pass to Serge Gnabry, who played it inside to Thomas Müller and watched his teammate work it back to Kimmich on the right-hand side. The cross was deep and perfectly flighted and Coman was a snapshot in composure as he guided the header past Navas.

Bayern had PSG on the rocks and, more specifically, Coman had Kehrer where he wanted him and so it was a surprise when Flick took him off. What did PSG have left? Di María played in Marquinhos, who was denied by another big Neuer block, and there was controversy when Kimmich appeared to catch Mbappé inside the area. No penalty, said Orsato. The glory belonged to Coman and Bayern.