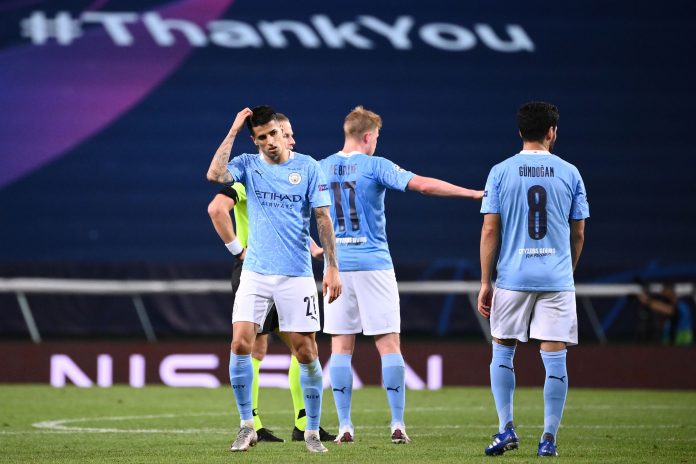 Manchester City’s Champions League ambitions are in ruins once more after Lyon shocked Pep Guardiola’s side in the quarter-final in Lisbon.

Substitute Moussa Dembele struck twice as Olympique Lyonnais stunned Manchester City with a 3-1 victory on Saturday to move into the semifinals of the Champions League where it will face Bayern Munich.

City started as firm favourites but came out second best against a fiercely determined Lyon in a game that swung on controversy and uncharacteristic errors in the closing stages.

Lyon went ahead in the 24th minute with Maxwel Cornet’s smart finish but City, lifeless as Guardiola chose to play a three-man central defence, looked to have been revived by Kevin de Bruyne’s precise strike from Raheem Sterling’s pass after 69 minutes.

Former Celtic striker Moussa Dembele, on as a substitute, restored Lyon’s lead in contentious circumstances 11 minutes from time, the video assistant referee ignoring what appeared to be an obvious foul by the goalscorer before he ran on to beat Ederson.

City pressed for the equaliser but Sterling was guilty of an atrocious miss, somehow sending his finish over the top of an open goal from Gabriel Jesus’ pass.

Lyon responded by taking advantage of chaos in the City defence with Ederson pushing out a low shot from Houssem Aouar and Dembele pouncing for his second.

City and Guardiola have suffered Champions League disappointment before but this may hurt more than any other – and make no mistake, the much-feted Catalan must take his full share of responsibility for a flawed game plan.