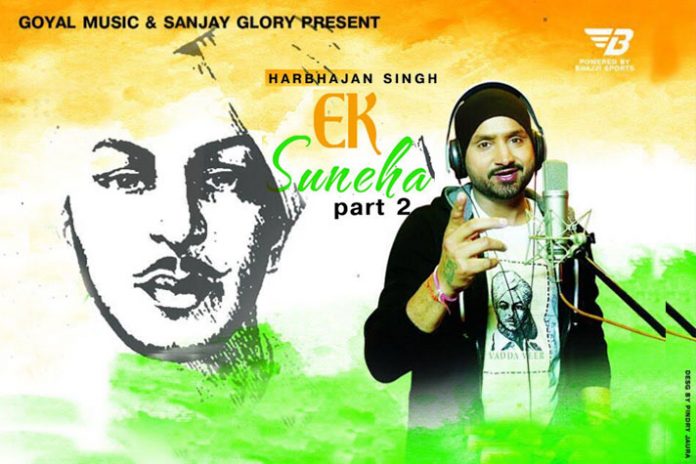 India’s cricket icon Harbhajan Singh has released a video message to pay rich tribute to Shahid-E-Azam Bhagat Singh. The 5-minute video is a message to the youth to emulate the characteristic values of the Shahid-E-Azam in the day to day life.

Harbhajan, in the video, urges the youth to live the values of Bhagat Singh in day to day life to safeguard culture, strong social fabric, environment, the air people breath and water. The message convincingly invokes the youth to not undermine the legend by confining the martyr’s glory to slogans and songs alone. The conviction in Harbhajan’s strong voice and the selfless message holds potential to convince billions of his fans and followers to keep the Shahid-e-Azam’s values alive in their deeds.

The video – Suneha 2 (Second Message) – was released at a Press conference in Jalandhar on Tuesday, March 20, to commemorate the 87th anniversary of Shahid Bhagat Singh’s martyrdom, which happens to be on March 23.

“The legends like Bhagat Singh have not just given us freedom, they have given each one of us a sense of pride. At 23, he had vision and courage to sacrifice his life for our freedom. We are enjoying that freedom, but not valuing it,” said Harbhajan, one of the most successful Indian cricketers and youth icon, at the launch of the video message Suneha 2.

“We can’t repay the debt of the legend (Shahid Bhagat Singh). But at least we must respect what he has given to us. Are we really serious when we narrate songs like why Bhagat Singh’s image is not there on our currency notes? Are we really paying the legend a tribute from the core of our hearts when we shout customary slogans on dated occasions? I strongly believe, we are not.

“How many of us will have the courage to embrace gallows? So, at least we must have a sense of responsibility to protect our society. If we can’t save it, at least we must pledge to not to spoil it. Let’s not become our own nemesis. That is the essence of the beautiful, thought-provoking narrative penned by Sanjay Glory. I am honoured to be the voice for these thought-provoking words.”

The video is produced by Bhatinda-based Goyal Music. Noted writer from Phillaur, Punjab, Sanjay Glory has penned the narrative.

“We are consciously and subconsciously damaging our society in our day to day lives. So grave is the damage that we need to invoke a Bhagat Singh in each one of us to get us free from the slavery of our own wrong doings. Sardar Bhagat Singh had sacrificed his life for our freedom. Today, we need to learn from him to sacrifice our unwarranted freedom for our lives,” said writer Sanjay Glory. “The narrative becomes meaningless unless it is heard. We needed a voice that will be heard. We needed an achiever who had earned the right to stand up for a cause with authority. Harabhan Singh has always displayed rare commitment for social causes. I am thankful that he happily agreed to give voice to my thoughts,” said Glory.

Surender Kumar Goyal, founder, Goyal Music, said: “Our business is all about the culture and essence of Punjab. Nothing captures the essence of Punjab more than Punjabi music. I am glad that Goyal Music is graced to be the part of a great initiative by Mr Glory and Mr Harbhajan Singh.”

This is Harbhajan’s second association with Goyal Music and Glory to send a strong message to the youth in particular and society in general to inculcate rich values and tradition of Punjab in their lives. The earlier co-presentation has touched the subject of “vulgarity” and “cheapness” in modern day Punjabi songs.

The nearly five-minute video has been a big hit on YouTube.