NBA Stats: If it seems like triple-doubles are happening more often than ever, that’s because they are by a huge margin. On average, the NBA has seen someone put up at least 10 of this, 10 of that, and 10 of those in one out of every seven games this season.

The rate of them happening is up 47% over last season, plus represents a staggering increase of nearly 700% over how often they occurred just nine years ago — when there were 18 in the entire 2011-12 season.

They happen with amazing regularity now. That doesn’t mean everyone is enthralled.

“I get it. They’re nice, round numbers, and people get into those things in sports,” New Orleans coach Stan Van Gundy said. “But I’ve never really been one who thought a whole lot of the whole triple-double thing.”

NBA Stats: Westbrook had 35 points, 14 rebounds and 21 assists to lead Washington to a win. It was only the third time someone had that many points and that many assists in an NBA game; throw in the rebounds, and Westbrook’s night was unprecedented.

“He does things I’ve never seen and I’ve been in this league for 30 years,” Washington coach Scott Brooks said. “He’s a winner.”

If people are bored by the triple-double, it might be Westbrook’s fault. He’s been making them seem like nightly happenings for years.

The reasons for the rise leaguewide in triple-doubles are many, but two of them are clear: the “freedom of movement” emphasis in officiating favors the offensive player, so that means more points and more assists.

So, too, does the increased pace of play, which also leads to more rebound opportunities. There are about eight more possessions and eight more shot attempts per team as compared to nine years ago, and every possession leads to a statistic of some sort. 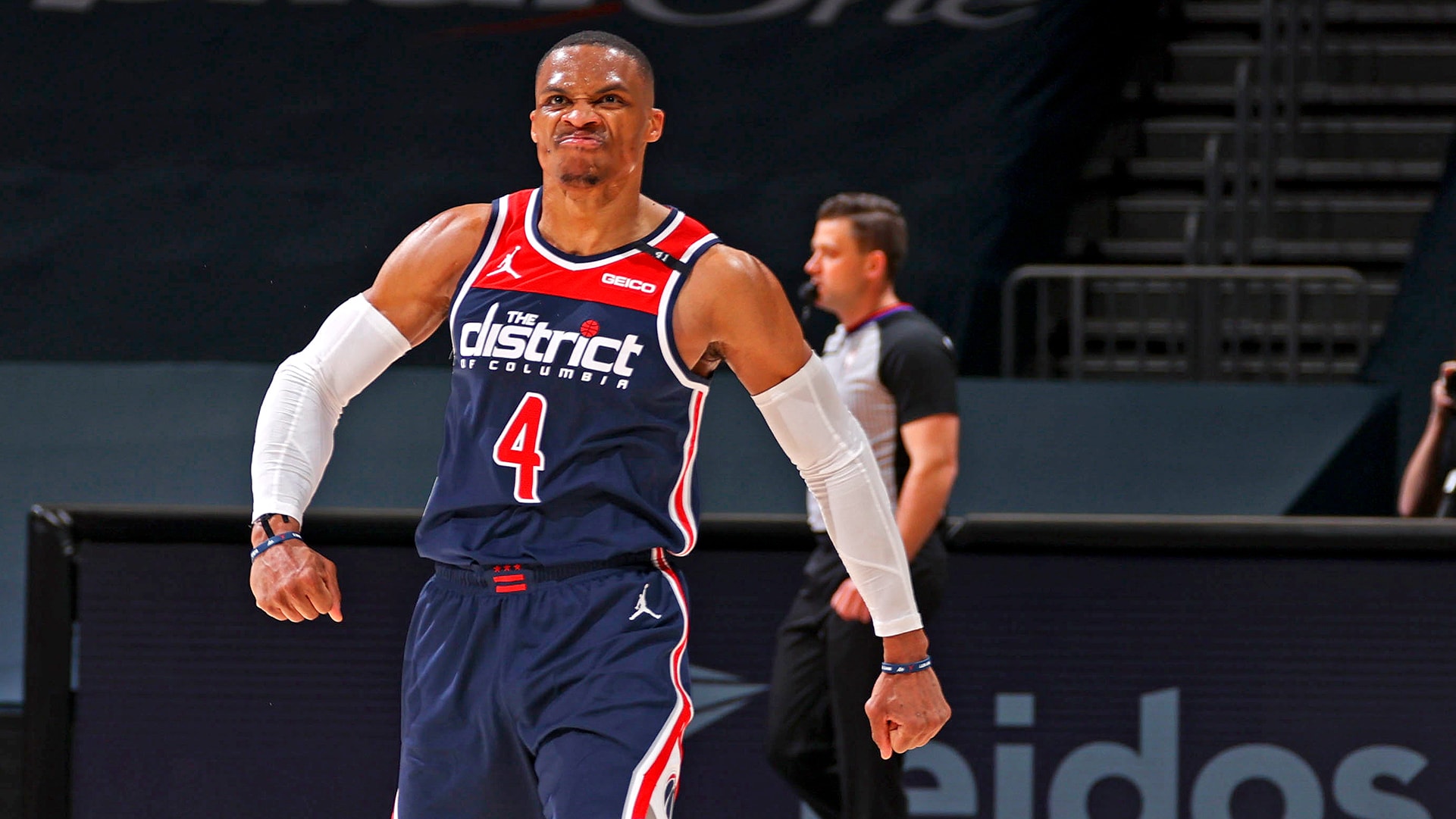 This is the fifth consecutive year that the NBA has seen players collect at least 100 triple-doubles; Westbrook got another one Tuesday night for No. 100, and in-game No. 692, that’s the fastest the league has ever gotten to the century mark.

Westbrook’s triple-double Tuesday was his league-best 17th. Denver’s Nikola Jokic and Brooklyn’s James Harden have 12 apiece and were followed by Dallas’ Luka Doncic with nine.

Put another way, we’ve seen practically as many triple-doubles in the last five years as in the 15 seasons before that combined.

NBA Stats: Even some players seem less-than-impressed by them these days.

“I could care less about a triple-double,” Miami’s Jimmy Butler said after he had one in last season’s NBA Finals. “We play this game to win.”

Here’s another example of how common the triple-double is getting: in the entirety of the 2011-12 season, only one player — Rajon Rondo, with six — had more than one of them. This season has already seen 14 players with multiple triple-doubles, a number that will almost certainly grow.

The record for most in one season is 127. That will likely get shattered; the league is on pace to top 150 for the season. On March 13, five players had them on the same day, the first time that’s happened in NBA history. The five: Harden, Westbrook, Julius Randle, Domantas Sabonis and Giannis Antetokounmpo.

“It’s not always about scoring,” Antetokounmpo said. “You can manipulate the game in different ways: passing, finding your teammates, putting them in the right spot.”

TJ McConnell of the Indiana Pacers had a triple-double with steals back on March 3, just the 11th of those ever.

There have clearly been nights where a player knows he’s a rebound or an assist away from getting a triple-double and might become singularly focused on getting that one last stat; that’s not so easy to do with steals, which made McConnell’s one of the more impressive in a while.

Defensive Player Ladder: Myles Turner makes case for DPOY, moves up to No. 2