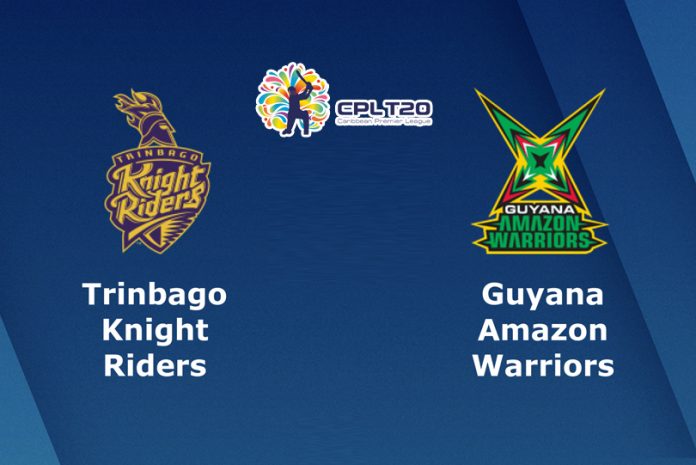 The Caribbean Premier League (CPL 2020 LIVE) is all set to commence on August 18, 2020. CPL will consist of 33 T20 games with all matches taking place in Trinidad and Tobago

In India, Star Sports reserves the official broadcasting rights for CPL 2020. They will broadcast the CPL feed exclusively on Star Sports 1, Star Sports 1 HD. Meanwhile, Indian viewers can also catch the exclusive action of this year’s CPL on FanCode

FanCode will provide a comprehensive digital experience to CPL fans through an array of features such as live streaming with interactive data overlays, real-time highlights, interactive live scores with multimedia commentary, and even provide India’s first customised commentary for fantasy sports users.

The 2020 edition of the Caribbean Premier League (CPL) is all set to begin on Tuesday in Trinidad and Tobago. The 1st match of the Caribbean Premier League 2020 will be played between Trinbago Knight Riders and Guyana Amazon Warriors at the Brian Lara Stadium, Tarouba in Trinidad. Both teams will look to kickstart their campaign on a winning note with a victory here.

The three-time champions Trinbago Knight Riders have one of the best batting lineups in the tournament. The explosive top order constitutes of Sunil Narine, Lendl Simmons and Colin Munro, all of whom have plenty of experience of playing the shortest version of the game.

The Trinbago Knight Riders have been one of the stronger sides in the CPL since the inaugural edition of the tournament as they have consistently challenged at the top of the table. Kieron Pollard will captain the team which contains plenty of seasoned campaigners like Lendl Simmons, Darren Bravo, Colin Munro, Sunil Narine and Pravin Tambe.

They will mostly have all of their players available for the opening match as their overseas trio of  Colin Munro, Tim Seifert and Sikandar Raza have joined the team. They have a lot of experience but they need to hit the ground running if they are to maintain their dominance in the tournament. Sunil Narine will play a vital role for his team with his all-round skills and he could even be sent to open the innings as he has done so frequently in the past.

Chanderpaul Hemraj and Brandon King form a swashbuckling opening pair for the Warriors. At no. 3, they have the dependable Shimron Hetmyer. New Zealand international Ross Taylor will come in next at no. 4 to provide stability to the middle order.

Wicketkeeper-batsman Nicholas Pooran, who has shown tremendous consistency in the last 2 years will most likely come in at no. 5. Explosive all-rounder Sherfane Rutherford and Keemo Paul will be handling the finishing duties. With Australian spinner Chris Green coming in at no 8 they have a long batting order. However, Warriors will hope that they don’t require the services of the lower-order and the top order does the job for them in most of the matches. Shoaib Malik, Shadab Khan and Qais Ahmed will not be available in this campaign for the team.

Players to watch out for
Ross Taylor
Ross Taylor will return to Guyana Amazon Warriors after taking a break last year. The middle-order batsman was drafted overnight for the CPL 2020. He will bring tons of experience and provide some stability also to the explosive batting lineup. In the four seasons that he has played, Taylor has scored 724 runs with an average of 31.5 in 36 matches. This speaks a lot about the consistency that Taylor has displayed in the CPL and his team will expect that he continues to smash runs for them.

At 48 years of age, Indian leg-spinner Pravin Tambe will be making his debut in the CPL 2020 this year with Trinbago Knight Riders. The oldest player in the league, Tambe became the first Indian to bag a CPL contract. He had shot to fame during his stint with Rajasthan Royals and has not looked behind since. Fans will be eager to see the veteran spinner weave his magic on the turning tracks of the Caribbean.

The youngster was the highest run-scorer in CPL 2019 with 496 runs from 12 matches at an amazing average of over 55 and a strike rate close to 150. His best score last season was 132 not out. It was the breakthrough season for King and now he will have to bear the burden of expectations from the fans, who will hope that he reproduces last season’s devastating form this time also.

Imran Tahir
South-African spinner Imran Tahir was the team’s top wicket-taker last season with 16 scalps from 9 matches at 12.31. He will again pose the main threat for the opposition batsmen. The aggressive leg-spinner is still a force to be reckoned with in T20 cricket and is going to be difficult to face. He has had some exciting battles with Kieron Pollard over the years and that contest will again be very interesting to watch.