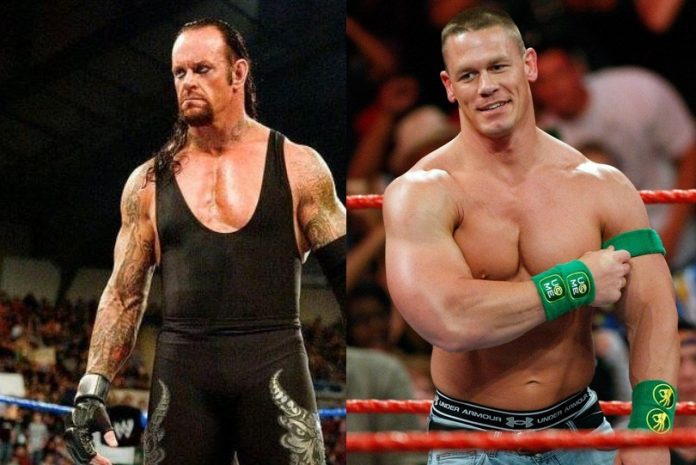 WWE News: Before making their big impact on WWE arena there were some superstars who did odd jobs or 9-5 jobs to make the ends meet. It included the likes of Roman Reigns, The Undertaker, John Cena amongst other superstars. Of course, now they have made millions from wrestling and they are not returning back that soon to perform these roles anymore. Recently, The Undertaker who announced his retirement, would not consider back to his previous employment.

Here’s the list of their work what they all did.

The Undertaker, who made in ring debut 30 years ago. But before his Survivor Series appearance that year, the Deadman, with 6ft 10in tall frame. He had a job which we imagined that was best in the world at. He worked as a ‘debt collector’ making sure whosoever take the money pay on time. Just imagine him knocking on your door demanding for cash?

Later in his life, he also worked as a bouncer in the club to add more in his income.

The 16-time champion does not need any introduction in today’s time since he is the brand in WWE. But before getting all such fame and millions in his account. But back then while Cena working in a gym, he also drove people round in a limbo. He was three hours late for his first pick up. Which he revealed later with Seth Meyers in 2019. He also admitted that he was the worst limbo driver in Boston.

The current face of WWE, the big dog, Roman Reigns. Before slamming chairs and putting his opponents on table and whacking their bodies on that. The 6ft.3In. Floridian installed office furniture for his sister’s business. “I was just working nine-to-five,” the former NFL star revealed. “I knew I wasn’t supposed to be putting on the furniture shirt. I was supposed to be doing something else. “And I didn’t know what it was at that point, but I knew WWE could possibly be that team I was looking for.”

The Celtic Warrior ‘ Sheamus made his ring debut 2009 and with the incredible victory over the likes of Roman Reigns, John Cena and Randy Orton. He is currently one of the most fiercest fella in WWE who breaks the Jaws of his opponents by his big boot. The Irish star, back then worked in IT and cover up around with the Computers, before getting his big break in WWE.

The man who defeated both Randy Orton and Batista at same night in his biggest match ever in his wrestling career at Wrestlemania. He, who focuses on his health and eating right and was once a fully fledged vegan, worked in McDonald’s. As a cashier over there he also swept the floors, taking the orders and admittedly lived off a fast food diet while he worked there. So that he can save some for financial need and now he is making millions in WWE.