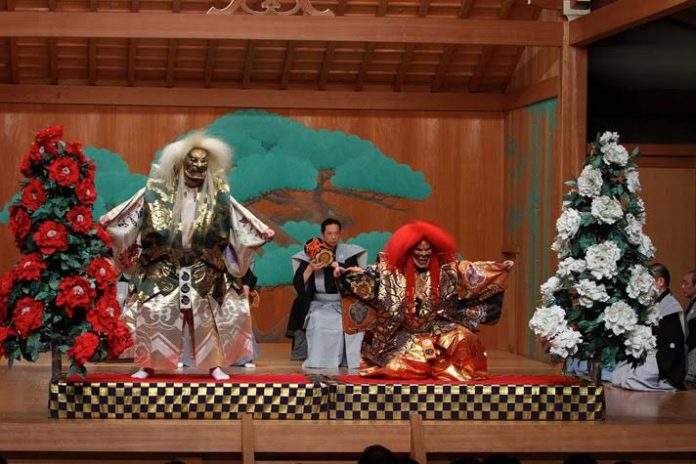 THE NOHGAKU FESTIVAL in the Olympic and Paralympic Games Tokyo 2020 will be part of the five joint programme of the “TOKYO 2020 NIPPON FESTIVAL” which will run in conjunction to the Tokyo 2020 Games.

Nohgaku or Noh and Kyogen is one of the oldest theatrical forms in the world, designated by the Japanese Government as an Important Intangible Cultural Heritage. Through the TOKYO 2020 NIPPON FESTIVAL, the next generation will be able to discover and deepen their understanding of this Japanese traditional performing art, Tokyo 2020 has announced.

Kanze Tetsunojo, Chairman of The Nohgaku Performers’ Association, and Yoshio Awaya, Managing Director of Japan Nohgaku Organisation, introduced the programme during the press conference in July.

Masaaki Komiya, a Vice Director-General of Tokyo 2020 said: “I would like to see the common spirit of ‘peace and diversity’ shared by nohgaku and the Olympic and Paralympic Games demonstrated globally.”

Mansai Nomura, Chief Executive Creative Director of the Tokyo 2020 Opening and Closing Ceremonies, who will be performing “Sanbaso (Divine Dance)” on Monday 27 July, the opening day of the THE NOHGAKU FESTIVAL in the Olympic and Paralympic Games Tokyo 2020, enthusiastically stated, “I hope to make a clean start dash for the festival since I will be performing on the first day and shortly after the Opening Ceremony on 24 July.”

Nohgaku theatre encompasses two types of theatre: Noh and Kyôgen which are performed on the same stage.

In 2001, Nohgaku has been proclaimed as “Masterpiece of the Oral and Intangible Heritage of Humanity” by UNESCO.

THE NOHGAKU FESTIVAL in the Olympic and Paralympic Games Tokyo 2020 will bring together heads of various Noh schools and living national theatres.

Scheduled Programme during the Olympic Period

Kyogen: “Suehirogari (An Umbrella Instead of a Fan)” by Yauemon Okura

Maibayashi (An abbreviated presentation of Noh in which the main part is performed by the protagonist, the Noh chorus and the Noh musicians wearing montsuki-hakama.)

Kyogen: “Boshibari (Tied to a Pole)” by Manzo Nomura

Noh: “Kantan (Life is a Dream)” by Takeda Takashi

Noh: “Hagoromo-Wago no Mai (The Feather Mantle)” by Minoru Umewaka

Noh: “Funabenkei Shiranami no den (Benkei in the Boat)” by Hisanori Kongo

Kyogen: “Boshibari (Tied to a Pole)” by Motonari Okura

The “Tokyo 2020 NIPPON FESTIVAL” is one of the official cultural programmes of the Tokyo 2020 Games that will take place between April and September 2020 when the world’s attention will be directed towards Tokyo and Japan.

The programme will boost excitement and anticipation toward the Games while communicating the unique Japanese culture widely across Japan and worldwide. It will encourage people from different backgrounds to participate and develop friendships that will lead to a diverse society, and presenting different opportunities for as many people as possible to take part in the Tokyo 2020 Games through cultural activities and art programmes.