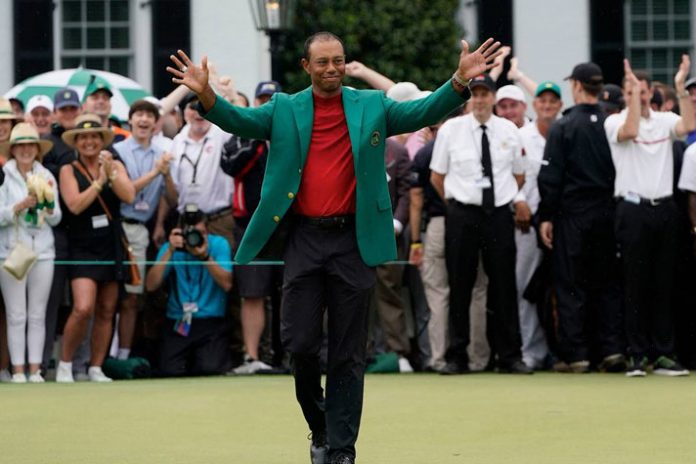 Tiger Woods’ historic victory in the Masters helped CBS score its highest-rated morning golf broadcast in 34 years even as an early morning start was not an ideal time for television audience.

A forecast of rain pushed the start of the final round to Sunday morning, where CBS Sports picked up a 7.7 rating. That’s the best morning number since CBS metered market ratings began in 1986. The ratings peaked at 12.1 from 2:15 to 2:30 p.m. ET during the exciting finale. However, due to the early start time, the 7.7 rating is the second-lowest for a Masters final round since 2004.

CBS touted the ratings as dominant, calling the Masters “the highest-rated morning golf broadcast in 34 years.” However, it is worth noting that the majority of golf broadcasts occur in the afternoon or evening; The British Open is one notable exception.

As Woods excelled Augusta on the historic Sunday for his 15th Major, first in a decade and after 15 years at the Masters, the golfing world was taken by storm by the resurgence of the Master. The Tiger mesmerized the entire sporting world with the show produced on the iconic greens of Augusta on Sunday.

As the TV ratings for the final rounds broke records, Twitter also reported Woods mania on the platform.

Twitter reported that, till late Sunday night (ET), 2.5 million tweets were sent about the Masters. Of that number, 2.1 million were about Woods, meaning he accounted for 84% of all Masters tweets. This was Woods’ first Masters win since 2005 and first victory in any major since 2008.

The top three most-tweeted moments of Sunday’s final round commemorated Woods’s highlights: his victory-clinching putt on the 18th green, his near hole-in-one on the 16th, and his birdie on the 15th to take the lead. Fourth on the list was Justin Thomas’ hole-in-one on the 16th, and fifth was previous leader Francesco Molinari hitting a shot in the water on the 12th hole to give Woods a chance to ascend the leaderboard.

Celebratory tweets arrived from sports luminaries ranging from Stephen Curry and Tom Brady to Serena Williams and Jack Nicklaus. Barack Obama, Jada Pinkett Smith, and Hugh Jackman were among the other notables to congratulate Woods.