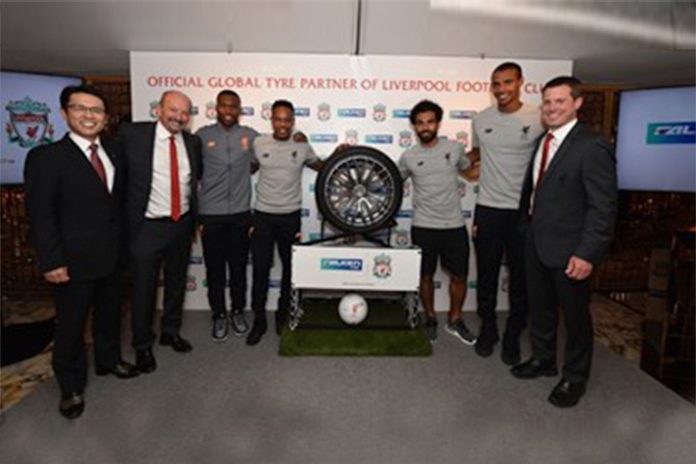 One Japanese brand is in sponsorship association with 21 football clubs across Europe for the 2018-19 season.

From Germany’s FC Schalke; FC Bologna and FC Turin in Italy; Real Betis, Seville in Spanish League; Poland’s Legia Warsaw; Dutch club FC Utrecht and Sweden’s Ostersunds FK to Liverpool FC in the Premier League, all have something in common. Separated by their leagues and nationalities, these clubs are united by their Japanese sponsor.

It is nothing unusual for international brands to invest heavily in sports teams and professional league sponsorships to amass global brand appeal, but this Japanese brand in a first-of-its-kind brand promotion and sponsorship strategy has invested in 21 European football clubs for the 2018-19 season.

Japanese tyre brand and automotive industry giant Falken Tyres has revealed the names of 21 European clubs signed for brand promotion in the Official Tyre Partners sponsorship category for the 2018-19 season.

Global sports media and marketing agency Lagardere Sports is currently managing the brand’s pan-European sponsorship strategy, brokering partnership deals with clubs from Germany, England, Spain, Italy, France, The Netherlands, Poland and, for the time first time ever, Sweden. The key highlights of the campaign include the presence on LED perimeter and static boards in all major European markets and corporate hospitality for regional distributor activations.

The biggest deals in the sponsorship portfolio is believed to be with Premier League club Liverpool, where the brand enjoys in-stadium presence on both LED perimeter boards and dug-out branding, and with Bundesliga clubs Ingolstadt and Schalke 04, where Falken ranks among the main Official Partners in the second tier.

Falken, till date, has signed commercial partnerships with the following European clubs:

Last week, LaLiga giants Atletico Madrid became the latest top division club to sign a deal with Falken tyres. Falken, with now having deals with football clubs from eight different countries across Europe, will target more deals in the region and outside Europe too.

Falken managing director Markus Bogner said: “With our range of football commitment, we ensure eye-catching and efficient advertising not only in our relevant target groups, but also in our core markets.

“The previous seasons have shown that football is still the platform with the most appeal, which is why we will certainly continue to develop this commitment gradually.”

The passenger car, light and medium truck tyre brand Falcon is owned by the Japanese company Sumitomo Rubber Industries (SRI).Launched in its native country in 1983, Falcon has now become a stand-alone brand that focuses on UHP (Ultra High Performance) products while utilizing professional motorsports to further develop and improve products for worldwide distribution.