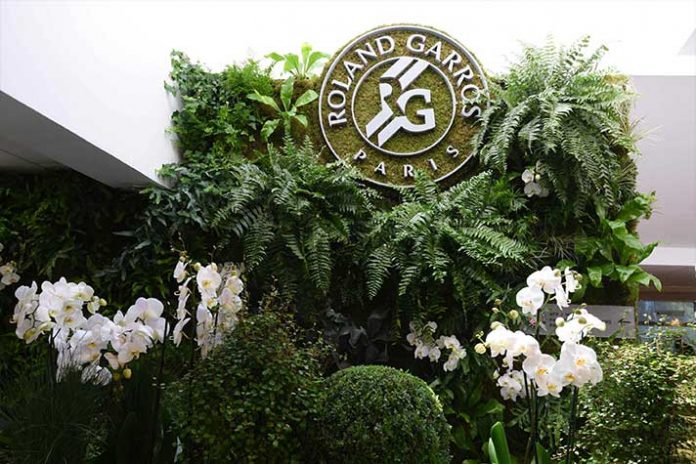 Red is the colour of year’s second Grand Slam – the French Open. The tournament is better identified with its courts – the ‘red clay’ of Roland Garros.

However, ‘Green’ will be the theme of the Grand Slam to be played on the Roland Garros courts from May 26 to June 9. The theme of the tournament will be plants. The French Open arena is ready to go all green, but for the tradition red clay courts.

Don’t be surprised to see an all-green French Open logo at the Roland Garros courts.

The introduction of green spaces into cities is a fundamental topic at Roland Garros. The new Simonne-Mathieu court is enclosed between four greenhouses, which will house collections of plants from the five continents. Five thousand spectators can be seated in this stunning venue, which is the perfect illustration, once again, of the alliance of sport and nature at Roland Garros.

Fruit plantations, honey making, a “Roland Garros“ rose variety, plant walls, more than 123 trees planted inside the stadium between now and 2020: revegetation is truly at the heart of the Roland Garros universe.

It was only natural that plants should be the common theme for the 2019 tournament, popping up in the Griffe RG collection, in the style guide and on the website as one the main themes of the 2019 event.

The stadium’s central walkway is being transformed into a contemporary green belt. The revegetation of the stadium’s pathways will not only make it more pleasant for spectators to stroll around the grounds, but will also help the sports facilities to blend into the unique Porte d’Auteuil environment.

The 2019 edition of the emblematic Parisian tournament will highlight how important it is to cherish nature and will promote biodiversity inside the stadium grounds. Because “going to Roland Garros is a bit like going for a stroll in the country…”, states an article on the French Open website rolandgarros.com.

Roland Garros Stadium in the heart of Paris has set ambitious objectives of making nature more prominent and boosting the atmosphere’s oxygen levels. New plants are installed with a view to boost ecology and cultivate biodiversity.

Plantation and greenery has been an important feature of the newly-erected stadium block.

The aim is to respond to the increasing thirst for green spaces, fight against climate change, improve air quality and help the urban stadium to blend into its exceptional surroundings. Plant life is taking root inside the Porte d’Auteuil stadium for the long term, and it perfectly matches this unique environment.

Guided by the plans put forward by landscaper Michel Corajoud, the New Stadium stands for a philosophy that enables it to fit into its exceptional surroundings, despite being in the city, and even to magnify them. “I wanted to create a fusion between the beauty of sport and the beauty of garden plants, to make these two worlds blend into one another,” explained landscaper Michel Corajoud, the man behind the blueprint for the New RG.

Showcasing wider pathways, new courts, the brand-new Philippe-Chatrier court and omnipresent greenery, the 2019 tournament is set to keep all of its promises. Spectators will be able to explore this legendary tournament’s new venue. The stadium blends into the urban environment of the Porte-d’Auteuil while staying in tune with the nearby Bois de Boulogne.