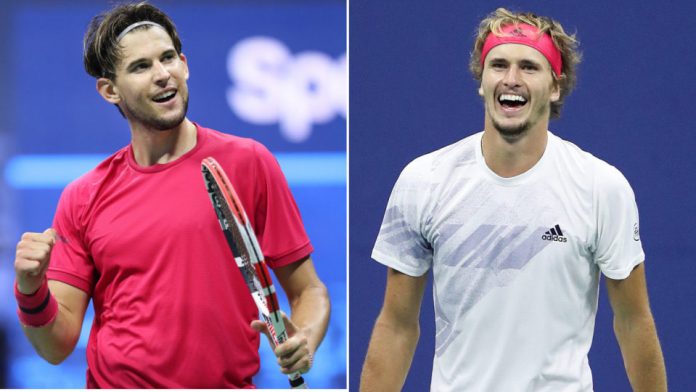 Austria’s Dominic Thiem and Germany’s Alexander Zverev will vie for the US Open title on Sunday in a final that will crown a new men’s Grand Slam singles champion for the first time in six years.

Second-seed Thiem has lost three previous Grand Slam finals — twice to Rafa Nadal at the French Open and once to world number one Novak Djokovic in Australia — while Zverev had never previously been beyond the last four at a major.

With Djokovic, Nadal and Roger Federer, the sport’s dominant trio, all absent from Flushing Meadows’ final weekend this year, tennis will have a new Grand Slam champion for the first time since Marin Cilic beat Kei Nishikori to clinch the U.S. Open title in 2014.

US Open 2020 Finals : Dominic Thiem vs Alexander Zverev in the battle of young guns LIVE @ 1.30 am

Federer and Nadal had both opted out of this year’s tournament, while Djokovic exited in the fourth round after an infamous swat of his racket sent a tennis ball into a line judge’s neck.

“From the moment Novak was out of the tournament, it was clear that there’s going to be a new Grand Slam champion,” said Thiem, who was thwarted by Djokovic in a five-set heartbreaker in Melbourne earlier this year.

“From that moment on, that was also out of my mind. I was just focusing on the remaining guys left in the draw.”

The 27-year-old, who suffered a shock first-round defeat at the hands of unseeded Thomas Fabbiano last year, has triumphed over his last three opponents in straight sets.

Standing in his path to a maiden title is 23-year-old Zverev, who is out for revenge after losing to Thiem in their Australian Open semifinal earlier this year.

The seventh-ranked Zverev came back from a two-set deficit in his semifinal against Pablo Carreno Busta on Friday, proving he has the grit and determination to pull through when the going gets tough.

“I looked at the scoreboard, I’m down two sets to love in a Grand Slam semifinal. I knew I had to start playing better, to give myself a chance,” said Zverev. “I wanted to give myself … set by set just the opportunity to stay in the match. That’s what I did.”

One of the tallest men in the sport at 1.98m, Zverev will look to unleash his massive serve to gain the advantage, after firing off 116 aces during tournament so far, compared to 41 from Thiem.

Thiem has also demonstrated a keen understanding of his opponent’s game, and leads 7-2 in their head-to-head, although he is taking nothing for granted.

“The moment we start the finals, we both want to win with everything we have. That’s all I focus on. A good record against Sascha, it doesn’t help me at all,” Thiem told reporters.

“I expect a very tough, very open match. I guess that’s what it’s going to be.”

Where fans can catch the Zverev vs Thiem Live in US OPEN 2020 Finals ?
The fans in the Indian Sub-Continent can catch the US Open 2020 finals LIVE Streaming on Disney+ Hotstar.
The US Open Finals will be broadcasted LIVE on Star Sports Select @ 1.30 AM IST on Monday morning.