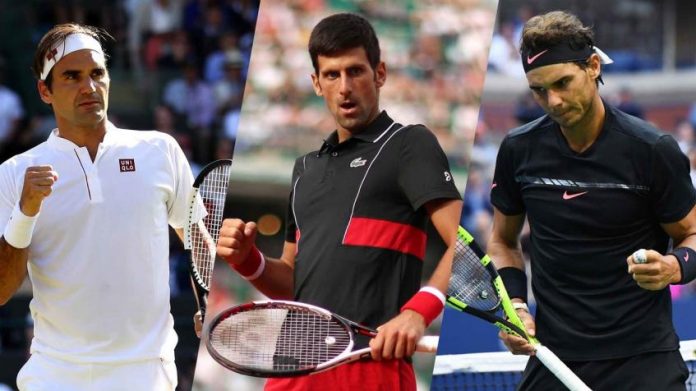 Novak Djokovic says he spoke with Roger Federer and Rafael Nadal about working with the ATP to set up a fund to help lower-ranked tennis players financially affected by the coronavirus pandemic.

During an IG live session he held with three-time major champion Stan Wawrinka on Saturday, Djokovic described what he called “a long conversation” with Federer and Nadal about “how we can contribute and how we can help lower-ranked guys who obviously are struggling the most.”
“I spoke to Roger and Rafa a few days ago and we had a conversation about the near future of tennis. How we can contribute to help lower ranked guys who are obviously struggling the most, Djokovic said.
“A majority of players ranked between 250 to 700 or 1,000 don’t have federation support or sponsors and are independent and left alone.”
Djokovic talked about trying to amass somewhere around $3 million to $4.5 million to distribute, perhaps to players ranked from around 200th or 250th to around 700th.
“Players hopefully will (also) contribute collectively to the relief fund that the ATP (and others) will distribute using models and criteria,” Djokovic added.

“You want to avoid giving money to player who fits into this category (low ranking) but does not need the money compared to someone else… hopefully between $3-4.5 million will be distributed to lower-ranked players.”

Djokovic, a 17-times Grand Slam champion, said other short-term solutions could include diverting bonus money meant for top players from season-ending events like the ATP Finals into the relief fund.

“If we don’t have any events (in 2020), maybe next year’s Australian Open prize money can be contributed to the fund,” the Serb added.

Djokovic also said there would be a system devised to determine which players were most in need of the cash.
“I’m glad the tennis eco-system is coming together. Everyone realises the base of tennis. These guys ranked 250 onwards are the ones making the future of tennis.
“We have to show them they’re not forgotten. We also have to send a message to young players that they can live out of tennis when there’s a financial crisis.”
The men’s and women’s professional circuits have been shut down for more than a month because of the COVID-19 outbreak and are suspended at least until mid-July.