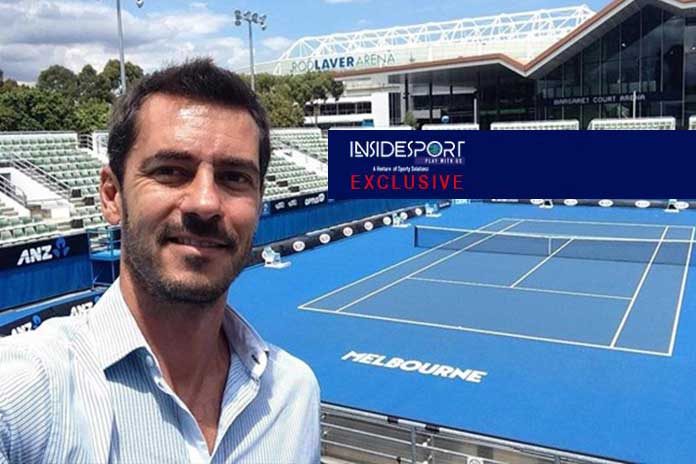 Tennis Australia is serious about exploring the India market for commercial growth. The plans include an Australian Open launch event in Mumbai in January 2020 and an India office over the next few years.

Tennis Australia upbeat about commercial prospects in India – among the fastest-growing international sports markets. Global audience report for the Australian Open 2019 has been the catalyst to intensify Tennis Australia’s business and marketing plans for India. The strategy has already seen three Tennis Australia business heads in Mumbai for the announcement event of the media rights extension agreement with Sony Pictures Network India.

Next on the card is an Australian Open 2020 launch event in Mumbai. The long term plan also includes san operations office in India – already Asia’s third-biggest market for Australian Open and No. 8 across the world.

Tennis Australia media rights head Alfonso Medina in an exclusive chat with InsideSport.co revealed his vision and strategy for India. Here are the excerpts:

InsideSport: How important is India to Tennis Australia’s business plan?

Alfonso Medina: India is hugely important for us from a business perspective. This year we will launch the Australian Open in India at Mumbai for the first time. This is a testament to Indian market importance for us. This year India has become the eighth largest territory globally in terms of Australian Open viewership and they are number three in Asia behind China and Japan. It can get much bigger than that. We are targeting the territory for continuous growth for the next three years. We will have a comprehensive marketing strategy with investment in television, print, digital, and e-commerce.

IS: Leading sports IPs like the LaLiga and NBA have started their dedicated India operations offices. They have intensified their activities in India in terms of academics, senior team tours, and other activations. Does Tennis Australia endorse this model?

AM: We certainly take note of all those activities. We have the ambition to have an office in India in the coming years. We had opened an office in Hong Kong three years ago. Now we have offices in Shanghai and Beijing. We have got three to four major sponsors in China. I will not say that we are going to replicate that model in India now. But we have got an ambition to do that.

IS: What is your India business strategy and goal?

AM: As I shared with you, India is the next big emerging market for us. We want to continue to build on our audience here. India has got an amazing number of tennis fans. We want to build to extend our reach beyond the hardcore tennis fans. We will be concentrating on our promotional programs among kids, travel, fashion, and other areas. We want people to think that when they watch the Australian Open it is not only about a blue synthetic court or winning a prestigious trophy. But it is an amazing experience that offers travel opportunities and a family, friendly environment. So, diversifying and growing our audience and fan base is at the heart of our vision for India.

IS: You said India is a growing market for tennis. Ironically, we couldn’t see that appetite for the sport in terms of commercial leagues? Professional tennis leagues launched in India have failed to have the kind of start other sports like badminton, wrestling or kabaddi have made? What is your take on that?

AM: We all know how big is the Indian Premier League and how big juggernaut kabaddi has become. The business model that we understand often relies on some wealthy investors who are willing to take risks. When the foundation of any such proposition is not so strong there is always the risk of some of the investors giving up quickly when they don’t see immediate returns. I see a huge question mark on a major franchisee tennis model coming up in India in the near future. I also don’t see a window for this. The calendar is so cramped and players also need time to recover. Should India host a major tennis tournament during the year, it will work. I will say if it is not for a franchisee model, you should take one of the tour events and really grow on that.

IS: What could be the reason that in spite of having our own tennis icons for different era, India has not been able to create a strong pool of quality tennis players?

AM: It’s true you have had some of the great players in singles and doubles. In doubles, India has had world’s best pair in Leander Paes and Mahesh Bhupathi. We will obviously be doing our bit by inspiring young kids to watch and play tennis also through all the programming that we will do with Sony (Sports Network).

In the country, there are a lot of opportunities to choose between cricket, badminton and other sports. We are aware of the challenges and the opportunities that cricket brings. We probably will have to think differently in terms of projection of the game in India. Access to the game should be easier and more friendly than becoming a member of a tennis club or to book a court. We are trying through our local partners to make tennis more accessible, more fun and more popular.

IS: How big a potential market can India be for tennis Australia in particular and tennis as a sport in general?

AM: As we discussed earlier, it is already the No 3 market in Asia and No 8 in the world. It is very important for us from a business perspective. We have got Infosys as our business partners since last year. We have got Kia investing significantly in this market. Within two months since their launch in India, they have become No. 7 car brand in the country during that period. We are very excited about that and how they are willing to work with us to build on the association with us and tennis. We are generally supporting tennis in India and see it growing as one of the most popular markets with grand slams and in particular Australian Open.