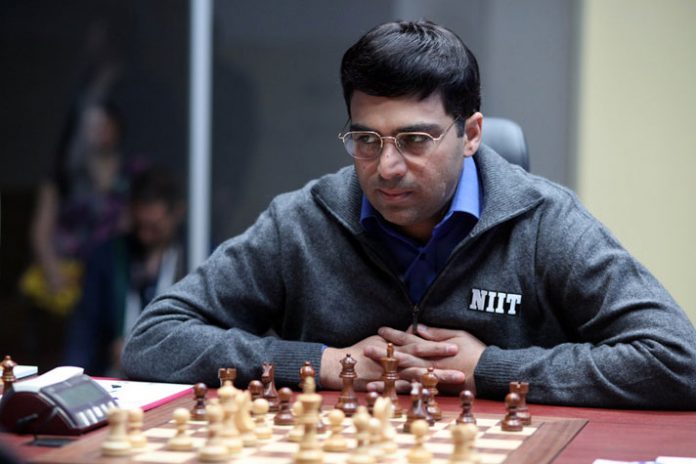 Viswanathan Anand drew with Ding Liren of China and Wesley So of the United States before going down to Ian Nepomniachtchi of Russia on the first day of Tata Steel Chess tournament here on Friday.

World champion Magnus Carlsen of Norway steered ahead of the rivals winning two and drawing one game and ended the day with five points overall as each of the rapid games are worth two points for a win and one for a draw.

With Carlsen surging ahead, Hikaru Nakamur of the United States emerged on the second spot with four points in all. Anand shared the third spot with Anish Giri of Holland, Ding Liren and compatriots Vidit Gujrathi and P Harikrishna.

The efforts of Harikrishna and Gujrathi were praiseworthy on the opening day as they both remained undefeated and pulled out three draws apiece.

Levon Aornian of Armenia, Wesley So and Nepomniachtchi shared the eighth spot on two points apiece with six rounds still to come in the rapid section of the super tournament, which will be followed by a blitz event that will last another eighteen rounds.

Anand’s campaign got off to a good start as he played out a draw as black against Ding Liren in the opener. Things got even better as Anand was able to beat arch-rival Wesley So in his bid to stay in contention for a place in the grand finale of the grand chess tour to be held at London in about a week’s time.

However, things took a turn for the bitter in the final game of the day as Anand faced a rejuvenated Nepomniachtchi after two successive losses in the first two games. The Russian capitalised on a king side attack to romp home in quick time.

Anand displayed exceptional technique meanwhile to beat Wesley So out of a Ruy Lopez game. It was a closed set up that looked level with dynamics in place. Anand went for an endgame that gave him a better Bishop against a Knight. It was a long grind that lasted 72 moves.

Anand needs to finish in a minimum sixth place here in order to qualify for the grand finale which will be played at London amongst the top four finishers of the tour.