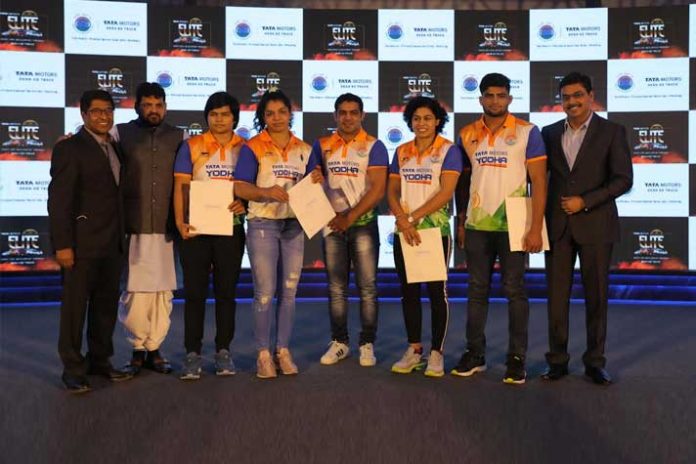 Tata Motors have further strengthened their commitment towards excellence in Indian wrestling with the announcement of the ‘Tata Motors Elite Wrestlers Development Programme’.

The ‘Tata Motors Elite Wrestlers Development Programme’ will fund the long-awaited hiring of two foreign coaches – one each for men and women elite wrestlers – to work with the elite Indian grapplers for the Asian Championships next year in Ashgabat, Turkmenistan, and World Championship in Astana, Kazakhstan. The Astana event will also serve as an Olympic qualifier.

The foreign coaches will join the programme as early as next month. They will help the elite wrestlers to prepare for the Asian Championships. The Championships will also serve as the cornerstone for the 2020 Olympics preparations and identify the medal hopefuls.

The WFI, which joined hands with Tata Motors before the Jakarta Asian Games to take Indian wrestling to new heights, is working relentlessly with its Principal Sponsors for the much-needed push to the elite wrestlers with an eye on a Gold at the 2020 Tokyo Games.

“Tata Motors, in line with its Group’s heritage has constantly looked at encouraging sports and promoting sporting talent across India and overseas. Wrestling as a home-grown sport has definitely grown in popularity and needs further support in enhancing talent. We are strengthening our association with WFI by directing our efforts to promote, train and develop wrestling talent with advance coaching and international sporting experience. We hope these initiatives help the Indian team to perform better. Our best wishes to the team for the forthcoming Tokyo 2020 and Paris 2024 Olympic Games,” said Girish Wagh, President, CVBU, Tata Motors, while announcing the programme.

The key job of the top-level foreign experts, who will be assisted by a competent team of support staff – from experienced physiotherapist to biomechanics, mental trainer and nutritionist – will be to accompany the wrestlers buttressed with exposure trips abroad to ensure world-class preparatory competitions for each of the elite talent as they prepare for the targeted  championships from January 2019 onwards.

Commenting on the partnership, Brij Bhushan Sharan Singh, President, WFI, said: “Tata Motors coming on board as training partner will go a long way in creating a strong sporting ecosystem and strengthening our elite programme. These facilities will help wrestlers focus fully on themselves and prepare for the toughest tests before winning medals for the country. WFI is grateful for the trust shown in the Federation by Tata Motors and strongly believes that this binding and cooperation will eventually help make a strong beginning for wrestling in India.”

The ‘Tata Motors Elite Wrestlers Development Programme’ will have the following salient features:

> Funding for elite foreign coaches for the Indian wrestling team

> Funding for overseas exposure trips (50 days or beyond)

> Support for Nutrition and dietary needs

The programme goes beyond the training and exposure to the players. Tata Motors has also come up with an initiative to provide full “injury cover” to Indian wrestlers during all international championships. The is yet another first for Indian wrestling.

“This is the best thing that can happen to any sport, particularly in a sport like wrestling where players are prone to injuries,” said two-time Olympic medallist Sushil Kumar.

“This will make us free from all worries, especially a huge relief while competing on a foreign soil where the medical expenses are beyond our reach,” added Pooja Dhanda, the World Championships bronze medallist.

The elite Indian wrestlers will constitute the pool of the core Indian wrestling talent in build up for the 2020 Tokyo Olympics. The group, to be picked by the WFI selection panel, will be fully supported by the Tata Motors Commerial Vehicle Division.

WFI commercial partners Sporty Solutionz will serve as the facilitators for the ‘Tata Motors Elite Wrestlers Development Programme’ under guidance from the federation.

Sporty Solutionz were instrumental in the game-changing Tata Motors-WFI partnership, which has ushered a new era in the commercial growth of wrestling in India.

“As the WFI commercial partners, we wanted the sponsorship business beyond the standard monetary and commercial deliverables deal. There have been several other interests. But brand Tata Motors from Day One had a belief in the sport and an unparalleled commitment to take Indian wrestling to the next level. The three-way alliance between Tata Motors, WFI, and Sporty Solutionz has worked with a common goal of taking the sport forward in a professional manner. The WFI president has a vision and Tatas have a strong commitment for the sport,” says Sports Solutionz chief executive Ashish Chadha.

The programme is conceived and developed jointly by the WFI, Tata Motors Commercial Vehicles team and Sporty Solutionz.

Also, at the event, players get the central contracts. This marks the first occasion for an Olympic sport discipline athletes in India to get annual contracts from their federation.  The central contracts are annual retainer deals, announced earlier by the WFI,  to 144 players in different grades. These ensure a basic annual financial commitment to the contracted wrestlers.