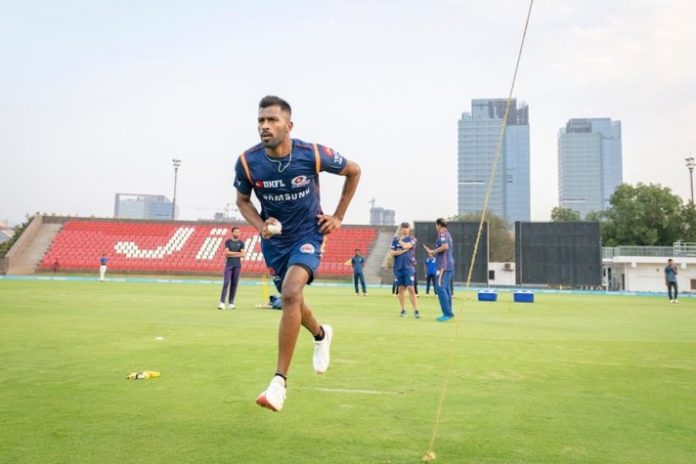 On a comeback trail, Hardik Pandya turned in yet another all-round show to help Reliance 1 inch ahead to the semi-final of the 16th DY Patil T20 Cup Mumbai.

Pandya returned to competitive cricket last week after undergoing a back surgery.

The India all-rounder had on Tuesday smashed his way to a sensational 105 in just 39 balls.

Also Read: Pandya blazes his way to a whirlwind 105 off 39 balls

Pandya blasted a 29-ball 46 (1×4, 4×6) after being promoted to one drop position against DY Patil A and later, bowled a crucial spell of 2/39, as Reliance 1 emerged winner by a narrow margin of seven runs.

The chase for DY Patil A almost worked out well with handy contributions, especially from Shubham Ranjane (43) and Rinku Singh (36), but their effort ended with the score at 198-9.

For Reliance 1, Digvijay Deshmukh returned with figures of 3-25.

Reliance 1 will now face BPCL in the semi-final on Friday. BPCL got through after posting an impressive 190-4 in the first quarter-final against RBI.

The chase for RBI was progressing well till they lost wickets at regular intervals to finish at 176-8, 14 short of the target.

The other semi-final on Friday will be played between Indian Oil and Western Railway.

The chase for Western Railway was fashioned by half- centuries from Mrunal Devdhar (68), Asat Khan Pathan (67) and Ahad Malik.

Aditya Tare played a captain’s knockOn a comeback trail, Hardik Pandya turned in yet another all-round show to help Reliance 1 inch ahead to the semi-final of the 16th DY Patil T20 Cup as he slammed 44 -ball 56 (4×4, 2×6).

Raje also made a useful contribution with the ball to finish with figures of 3-35.