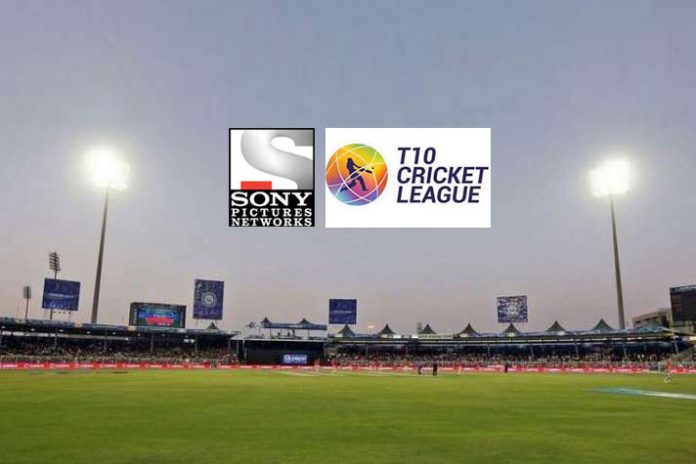 Sony Pictures Network India has extended their media rights deal to broadcast the T10 league for the next three years.

The T10 league in its inaugural season last year has registered a considerable broadcast success on Sony Pictures Network even as the alliance was formed just a week before the four-day event then.

T10 League today (Thursday) has announced Sony Pictures Networks India (SPN) as their official broadcast partner for a three-year period starting with the 2018 edition in Indian Sub-continent and Middle East & North Africa (MENA). The T10 League sanctioned by the International Cricket Council (ICC) will be shown live on SONY ESPN and SONY ESPN HD channels in India, Ten Sports in Pakistan, Ten Cricket in Middle East & North Africa and shall also be streamed live on their digital platform SonyLIV.

The T10 league this year will be played for over 10 days and the media deal is inked almost a month and a half before the new season to start, the broadcaster is upbeat about providing cricket fans an unparalleled experience.

Rajesh Kaul, Chief Revenue Officer, Distribution and Head – Sports Business, Sony Pictures Networks, said, “We are committed to providing an unparalleled sports viewing experience to sports fans in India. The T10 League has already captured the interest of viewers because of its fast-paced format. The second edition has an impressive line-up of players from across the word which is sure to engage viewers who are looking for the best in sports entertainment.”

Shaji Ul Mulk, T10 League Chairman said, “We are delighted to have Sony Pictures Networks as our broadcast partners for Indian Sub-continent and Middle East & North Africa from 2018 edition for three years. This allows us to take the league to a much-wider audience across the region and help us promote the format and grow year-on-year.”

The second season will be played across 12 days starting from November 21 till December 2 2018. The player draft held on September 24 gave a glimpse into the big-ticket names that shall ply their trade in the latest format of the game. West Indies’ swashbuckling batsman Chris Gayle was the top pick joining defending champions Kerala Kings for this edition.

T10 Cricket League is a professional ten-over format Cricket League launched by T10 Sports Management. It is sanctioned by the International Cricket Council (ICC) and is conducted in partnership with the Emirates Cricket Board.

The second season is scheduled from November 21 to December 2 at the Sharjah Cricket Stadium.