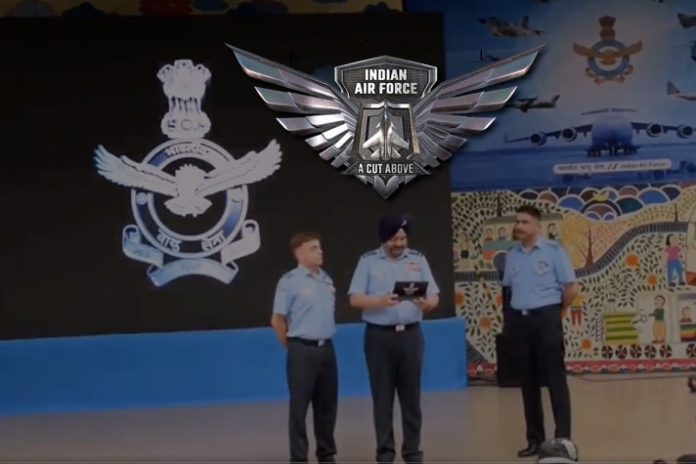 The mobile game app launched by the Indian Air Force on Wednesday allows you to play a combat game on 10 different missions, including the surgical strike, using your mobile phone.

The game features a character similar to Wing Commander Abhinandan Varthaman with a gunslinger moustache as the mascot pilot. Player can customise the characters.

The app offers dramatic missions like the surgical strike mission.

The player opts for a multi-role Mirage 2000 aircraft armed to the teeth with weapons such as the MICA, Griffin LGB, Spice 2000 bombs and 30 mm autocannons. Laser guided bombs are dropped on the enemy camps. The player in the process provides support to a team of ‘Garud’ commandos and also offers cover to exfiltrate from the area.

The game, which has been launched with a single-player version, includes nine other combat missions of similar nature.

In the ‘natural disaster event’, the challenge for the player will be to provide humanitarian assistance after a dam breach occurs high up in the mountains.

A player is required to carry out a combat air patrol and intercept incoming enemy fighters and bombers in ‘air defence ops’.

In the mission ‘combat support ops’, a user will fly a heavy transport aircraft to provide much-needed supplies in forward areas. The player will provide close air support to on-ground troops flying an attack helicopter in the combat mission ‘anti-tank and SEAD’.

The ‘offensive cap’ mission requires a player to use state-of-the-art electronic weaponry deep into the enemy’s airfields.

In ‘air-to-air refuelling’, a player will be challenged to fill up tanks mid-air and provide fuel to teammates.

The ‘base defence mission’ challenges players to use SAMs, AA guns and shoulder fired weapons to protect the base. A player faces the challenge to take on enemy mothership and unmanned aerial vehicles in the ‘futuristic weapons’ mission.

The game can be downloaded from Google Play Store on Android and iOS platforms. In order to play the game, one has to register on the app using a valid e-mail id and password.

There are also features of free flight and training apart from the game which can be played at three levels of difficulty — easy, medium and hard.

The user has the option to choose between seven different aircraft including the Hawk, Mi-17, C17, Apache, Mirage 2000, Su-30 and Rafale. This set of aircraft does not include the Tejas, Bison or the MiG-29.

There are three training missions available for the players, i.e., take off and navigation, armaments training and landing.

The app has been launched with the collaboration of India-based developer Threye Interactive. It also contains a link to careers in the air force apart from the game.

The IAF had earlier launched another mobile gaming app called ‘Guardians of the Sky’. However, the new game has more features and is a lot more interactive.