Chris Paul is destroying the Nuggets right now. He just keeps forcing the Nuggets into unfavorable switches and taking advantage of it. He’s up to 17 points to go along with his 15 assists (and 0 turnovers!).

This one is over. Wrap it up and tie a bow on it. The Suns have expanded their lead to 25 points early in the fourth quarter, and the Nuggets have shown no sign of comeback-ability.

We might not even see Nikola Jokic again in this one, given the large deficit.

Barring an absolutely epic comeback, the Suns are going to take a 2-0 lead in this series. They lead the Nuggets 86-67 after three-quarters of action.

The Suns have four players in double figures, compared to just 2 for Denver. They’re also shooting the 3-ball at a much better clip. Denver doesn’t seem to have answers for Phoenix on either end, really.

His team is getting thoroughly outplayed, but Jokic is still on triple-double watch. He has 24 points, 13 rebounds, and 6 assists with 90 seconds remaining in the third quarter.

The Suns are up big, and Devin Booker has only taken 11 shots. This has been a solid team performance from the Suns so far, just like Game 1 was. Everyone for Phoenix seems to be playing their role well.

From the @CP3 Sweet Spot!

This game is quickly approaching “this could get ugly” territory. The Suns have come out in attack mode in the second half and they have quickly expanded their lead from 10 to 19. The Nuggets need to respond, or this one could get away from them.

If you missed the start of the 3rd…

this pretty much sums it up pic.twitter.com/ByvjR3hdvm

Jae Crowder is having a great game for Phoenix. He’s hit all 4 of his shot attempts, including three 3’s. He has 11 points and 2 rebounds in 17 minutes.

Michael Porter Jr. has just 2 points and has shot just 1 of 8 from the floor. With Jamal Murray out, Porter Jr. is the guy that Denver has looked to be a secondary option alongside Jokic. He’ll need to step it up in the second half.

In the words of @DevinBook:

This no-look dish from CP3 👀 pic.twitter.com/oSOZB00pB3

The Nuggets have to be happy to have Will Barton back in the rotation. He’s played six minutes off of the bench (so far) and scored 7 points on 3 of 4 shooting from the floor.

Chris Paul is up to 5 assists early in the second quarter. His passing ability has been on full display in this one so far. Very few have done it better.

One-quarter of action is in the books in Phoenix. The Suns lead 25-21, thanks to 6 points from Devin Booker and 4 assists from Chris Paul. Jokic is leading the way for Denver, but he’ll need some help. Michael Porter Jr. didn’t score in the first quarter.

Jae Crowder has 5 points on 2 of 2 shooting early on for the Suns. Crowder is often a bellwether for Phoenix. When he’s playing well, the Suns tend to play well. So his solid start is a good sign for them.

De’Andre Ayton has two personal fouls already with less than five minutes gone in the first quarter. That’s a huge development for the Suns.

Ayton went minute-for-minute with Jokic in Game 1, and his play was a big reason that the Suns were able to pull out a win. Now Ayton will have to be careful not to pick up another foul, while also trying to remain aggressive.

Michael Porter Jr. is apparently playing through some stiffness in his back. That will be something to keep an eye on in this one, as the Nuggets will need Porter Jr. to be aggressive and productive.

The Suns had 4 different players score 20+ points in Game 1: Booker, Paul, Ayton, and Bridges. It will be interesting to see if they can duplicate that production tonight. If they can, they’ll have a great chance to win a second straight game. 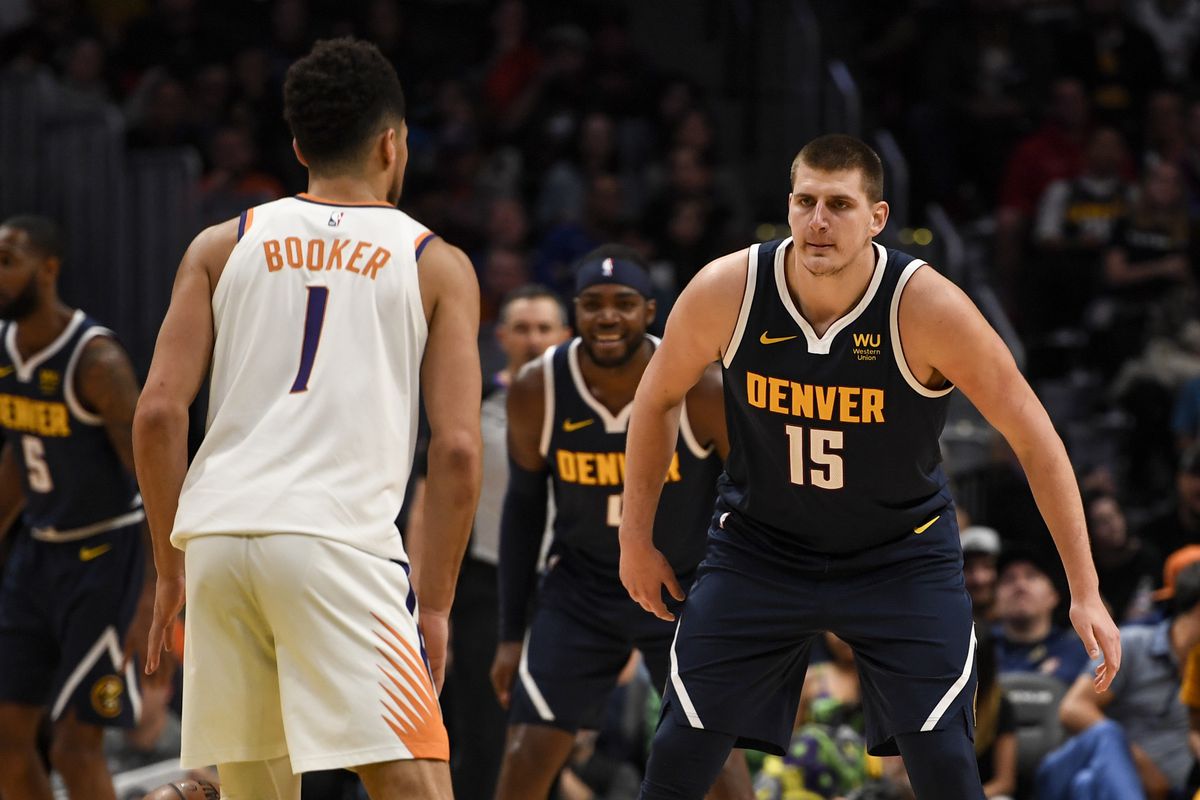