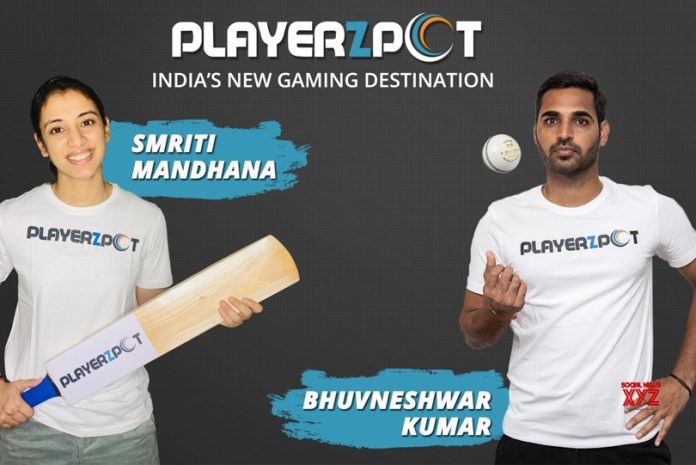 Bhuvneshwar Kumar is expected to play a very important role for Sunrisers Hyderabad in the Indian Premier League (IPL 2020) this year. But off the field, Bhuvneshwar has been picked to be the brand ambassador of one of the upcoming fantasy platform in the country.

Playerzpot, one of India’s leading fantasy sports gaming platforms, has announced the signing of cricketers Bhuvneshwar Kumar and Smriti Mandhana as its brand ambassadors.

The partnership will see the cricketers in brand’s upcoming campaigns and promote Playerzpot through engagement activities.

As a cricket fan myself and fantasy league becoming a new trend, I wanted to witness how fans get involved in this fantasy gaming thing. Playerzpot connected me with that and I was very excited to see how they had created such a great platform to engage with fans and sports in general,” said Bhuvneshwar about his association.

“I am very excited to be a part of this journey as it will be another opportunity for me to engage with the fans, players, and sports enthusiasts.

“People these days are keeping up to date with a lot of knowledge, may it be team points, player stats, etc and in turn winning a lot of prizes while being involved with Playerzpot. So I am hoping a lot of fans get involved with regard to this gaming platform,” he added.

Mandhana was all praises for the gaming portal and said: “I feel that it is a great platform that brings fans closer to the game and blooms out that connect really well between the game and players. So I was very excited to see Playerzpot doing that brilliantly.

“I am expecting to see a lot more fans to come out and show their knowledge and skills and put it to the test against the best. Plus, I hope my presence would increase the widespread popularity of fantasy gaming amongst the females as well,” she added.

Yogesh Doiphode, who is the founder of the gaming portal, said: “We are happy to welcome the two cricketing greats, Smriti Mandhana and Bhuvneshwar Kumar, to the Playerzpot family. It is the beginning of a new innings for the company and we hope to grow aggressively in the fantasy gaming arena.”

When asked about his decision to collaborate with Bhuvneshwar and Smriti, Mitesh Gangar, who is the co-founder at Playerzpot, said: “We believe that fantasy gaming is skill based. And what’s better than having two highly skilled cricketers who have proved their mettle in the international arena. With Bhuvi, it was his individual journey which resonates to how Playerzpot has grown over the years. It is a clear example of where skills can take you.

“In the current scenario, fantasy gaming in India is predominantly male dominated. However, when it comes to skills and analysing ability, women are no less, the more the female participation, the better it is for sports in India. That was one of the many reasons we onboarded a female cricketer as we wanted to promote fantasy gaming amongst females,” he added.