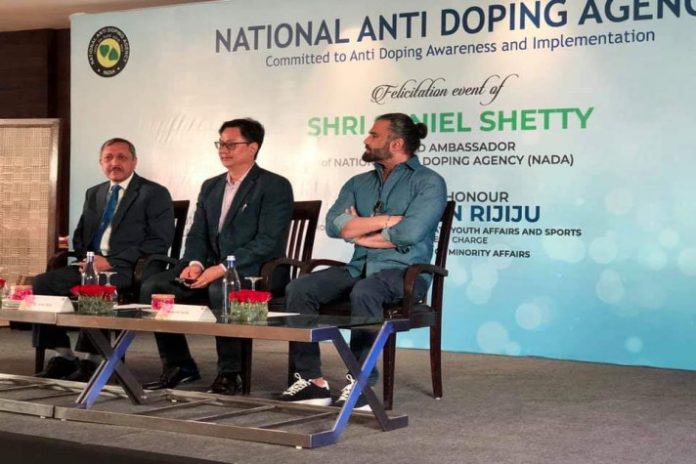 Actor Suniel Shetty will be unveiled as the brand ambassador of NADA here on Tuesday (today) and the country’s anti-doping body is hoping that his celebrity status helps its efforts to clean up sports in the country from the menace.

More than 150 athletes have failed dope tests this year though bodybuilders make up more than one-third of these offenders. This is not a welcome sign with less than eight months to go for the Tokyo Olympic Games.

This has raised concerns about whether India may be able to test enough athletes in the coming months ahead of the Tokyo Olympics.

NADA Director General Navin Agarwal said that Shetty’s celebrity status will give him more “clout” and “reach” than a former or a current sportsperson.

“We thought that an actor of the status of Suniel Shetty will be able to send out a message to shun doping, that doping is not good for themselves and for the country. We felt that celebrities will have more outreach to the masses of the country as they have a lot of following,” Agarwal told PTI.

Asked if a former or a current athlete would not have been an appropriate person to be made a brand ambassador, he said, “A former athlete would have lacked clout (as compared to a film star) and may not be able to spread the message (to shun doping) to the masses.

“As far as current athletes are concerned, they are busy playing their respective tournaments and training, so we have not thought about them for this.”

Former sprinter and Olympian Ashwini Nachappa said she wouldn’t want to be too critical of NADA’s initiative as brand ambassadors have nothing much to do.

“I am not sure about the rationale of the NADA making an actor as the brand ambassador. At the same time, I will not be too critical because brand ambassadors come and go and they have nothing much to do.”

India Tour of South-Africa: India vs South Africa series to be played without crowds? CSA pleads with government to allow fans

India Tour of South-Africa: India vs South Africa series to be...