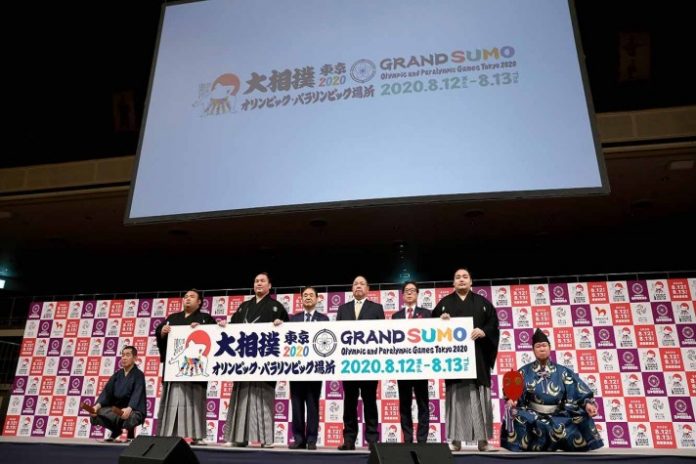 The Japan Sumo Association is aiming to seek an enhanced attention through Tokyo 2020 Olympic Games. The association is collaboration with Tokyo 2020, will hold a special Grand Sumo event at the Ryogoku Kokugikan Sumo Arena on 12 and 13 August.

The “Grand Sumo Tournament Rooting for the Tokyo 2020 Games” event is designed to bring more attention to the traditional Japanese sport. It will be one of the events of Tokyo 2020’s co-hosted NIPPON FESTIVAL programme, a collaboration between Tokyo 2020, local governments and cultural and arts groups nationwide that aims to disseminate Japan’s culture and performing arts both inside and outside Japan, states a Tokyo 2020 report.

During the tournament presentation at Ryogoku Kokugikan, the Japan Sumo Association president Hakkaku Nobuyoshi said he wanted a global audience to better understand the sport, which is steeped in Shinto ritual tradition.

Hakkaku Nobuyoshi, President of the Japan Sumo Association, said:  “With the Olympic and Paralympic Games being held in Tokyo this year, there is likely to be increasing worldwide interest in Japanese culture.”

“The tournament is expected to deepen global understanding of Japan’s traditional sport of sumo and bring it to the attention of a more diverse audience, including those who may not have had much opportunity to watch sumo, such as people from overseas and those with impairments.”

The two-day event will take place just a few days after the Closing Ceremony of the Olympic Games and is expected to feature grand champions or “yokozuna”, who are big stars in Japan.

Kakuryu, who is a yokozuna, said during the tournament presentation he was looking forward to introducing sumo to a “global audience” and “receiving people from all over the world”.

“We will try our best to introduce sumo to the global audience and show ‘Omotenashi’ hospitality to them. We are really looking forward to receiving people from all over the world,” he added.

To help everyone to understand the sport better, there will be simultaneous commentary in English and Japanese. The commentaries will include explanations of the meaning behind some of the traditions, such as how wrestlers enter the ring.

A winner will be crowned on both days, with the two champions facing off in a grand final on the second day. Visitors will also be able to mingle with wrestlers, shake hands and take pictures with them.

The Grand Sumo Tournament will take place at the Kokugikan Arena, the spiritual home of the Japanese national sport and the venue that will host the boxing competition during the Olympic Games.