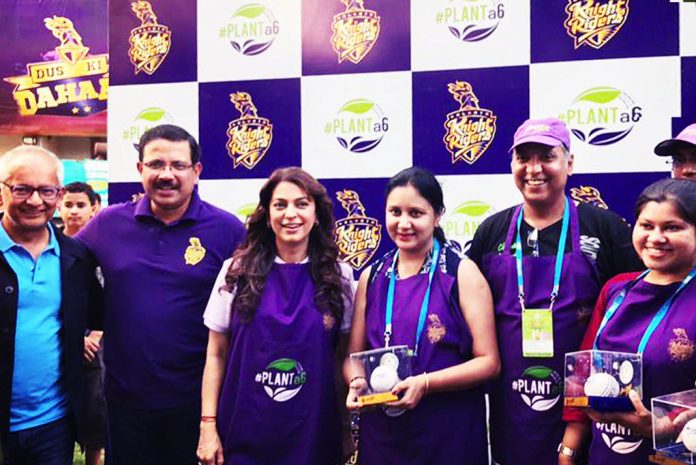 Indian Premier League. Cricket’s biggest commercial venture is often talked in terms of finances, contracts, runs and records. These are the ingredients that will enthrall cricket lovers, market and certain corporate. However, there is the other side of the league, too. That goes far beyond the boundaries and boardrooms, for the cause of common masses, society and issues like environment.

IPL associates – franchisees and sponsorship brands – have been engaged in campaigns where service to the society is integrated with marketing initiatives.

Kolkata Knight Riders introduced their campaign “Citizens for tomorrow” for this year. They also tried to make their fans aware about the alarming effects of plastics use. Polyethylene flags are replaced wth recyclable paper stick flags.

MUMBAI INDIANS: Education For All

The Education for All initiative (EFA) was launched in 2010 with the objective of providing access to quality education in India. Through a partnership with several NGOs, Reliance Foundation and Mumbai Indians have positively impacted the lives of 100,000 of underprivileged children during the last few years.

UNICEF India and Delhi Daredevils have come together to help empower girls in India. The partnership aims to support the efforts to protect millions of adolescent girls still facing obstacles in their lives by experiencing various forms of discrimination, exploitation and abuse on account of their age and their sex.

Dare to Care is an effort to help focus on issues related to empowering girls with education, which will further give them the courage to say no to an early marriage and the power to take decisions which directly impacts their lives.

Delhi Daredevils will help spreading awareness through their franchise, the squad and the ever-loyal fans. Some percentage from IPL ticket and merchandise sales will go into ‘Dare To Care’ funds. Some Daredevils memorabilia will be put up for auction and funds will be used in this campaign.

Along with this, the team sponsor Mother Dairy took this opportunity to bring forward their farmers for this season of IPL.

Tamahar, which was founded in 2009, was envisioned to provide a holistic intervention for children with special needs, to give personalised care and to enable caretakers to be a part of the rehabilitation process. In an institution where brain damage is identified, assessed and intervened, Tamahar certainly stepped out of the crease for their children with RCB.

Lloyd ACs, also the associate sponsor, took this initiative forward by contributing Rs 100 for every Lloyd AC bought. And through first-of-its-kind-initiative it also vowed to give 501 free ACs to hospitals that cannot afford to them in critical areas like ICUs, labour rooms and other significant areas.

The session was organised to acknowledge and motivate the children to follow their dreams, it also helped in rejuvenating the players from their daily schedule.

Kings XI Punjab announced their Corporate Social Responsibility (CSR) initiative for the season when they decided to refurbish a girls’ school each in both their homegrounds — Indore and Mohali. The projects will be executed with a NGO, Yuva Unstoppable, whereby Kings’ XI Punjab will provide them better sanitation, drinking facilities and overall infrastructure.

As a part of the project, team director Virender Sehwag along with David Miller, Eoin Morgan, Mohit Sharma, Varun Aaron, Akshar Patel and Gurkeerat Mann visited Govt. Middle School 27, in Indore on Monday and interacted with the students. The students performed a small skit for them as well, followed by the players playing a one-over friendly match with the students of the school.

Yuvraj, since his own brush with cancer, has been taking time out of his schedule to raise awareness about the different kinds of cancer, tests and treatments available.

IPL is showing the way how growth of sport can contribute to the well-being of the society. That given another sense of hope to billions of sports lovers in India – for whom this game has been a religion.