“Star is gearing up for the new channel. Statutory procedures are already in place. The in-house production and creative teams are working on the content and channel packaging. We have acquired license for the desired Kannada type fonts. Everything in moving smoothly and swiftly for the November transition date,” a Star India official told insidesport.co.

The broadcast has also published a public notice pursuant to Telecommunication (Broadcasting and Cable Service) Interconnection Regulation 2004 and the Telecommunication (Broadcasting and Cable Service) Interconnection (Digital Addressable Cable Television System) Regulation 2012 to inform all associates that “Channel V shall cease to exist from November 19”. 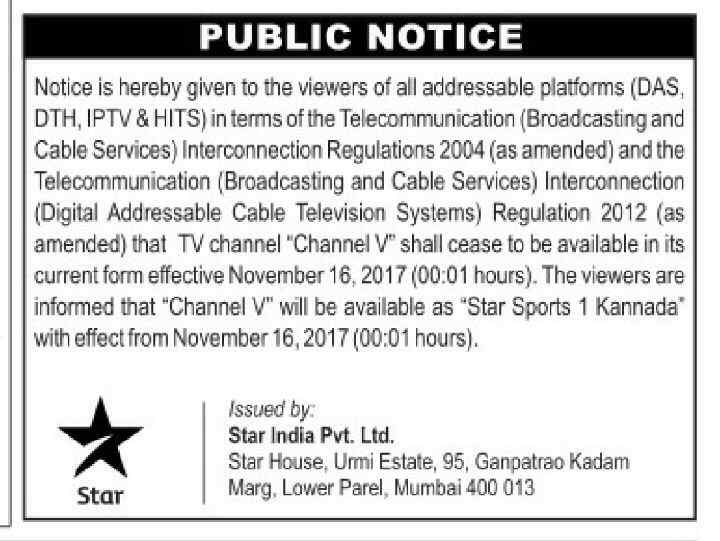 Star Sports Kannada launch is scheduled around the Indian Super League Season-4 kicks-off on 17 November. Like the other channels from Star India’s regional sports portfolio, Star Sports 1 Kannada will be the home of India cricket and local leagues like Pro Kabaddi and ISL. Karnataka Premier League (KPL), the State-owned version of Indian Premier League, will be one of the driving properties of the new channel from India’s biggest bouquet of sports and GEC channels. Star is also working on to acquire other local sports properties and content for the channel.

InsideSport has also reliably learnt that the Star is in talks with Cricket Association of Bengal to acquire the broadcast rights for the proposed Kolkata Premier League. This will further boost the regional hold for the broadcaster.

End of Channel V is primarily influenced by the fact that the broadcaster has failed to achieve the desired results from the youth entertainment platform in spite various strategic experiments.