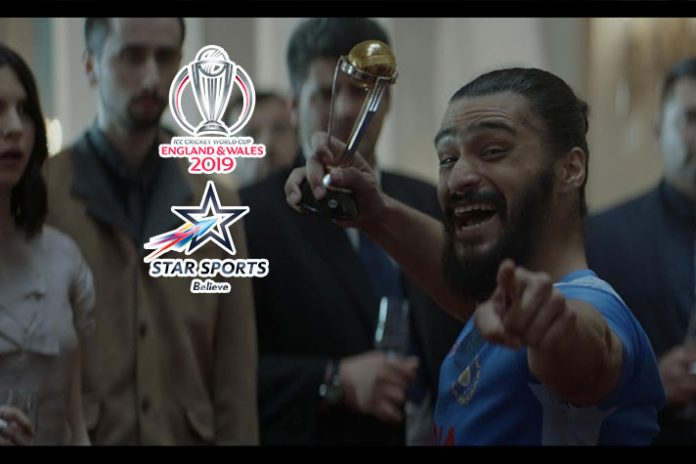 Cricket World’s biggest event, ICC World Cup 2019 is set to enthral audiences around the world. In run up to the ten team competition in England and Wales from May 30 to July 14, ICC World Cup 2019 official global broadcaster Star Sports has launched the campaign to celebrate 45 days of cricket extravaganza.

To create buzz around the mega cricketing event, Star Sports unveiled the official world cup campaign  #CricketKaCrown. The campaign portrays ICC CWC trophy as the ‘Crown of Cricket’, which every team going to England would have their eyes on. A total of 10 countries will participate and play each other in the round-robin format, having one dream in common, clinching one of the most coveted trophy of the sporting world. Capturing this sentiment as part of the campaign, the trophy is metamorphically referred to as the crown.

Conceptualized and created by Ogilvy & Mather, the campaign highlights all participating teams that are coming to England to win the crown – the World cup trophy and, the focus is on that one Indian fan – Vicky who starts the fun banter by humming ‘Crown Cricket Ka Madamji Hum Le Jaayenge’ in front of the crowd. The element of fun grows in the campaign when fans from other countries are revealed as guests who have descended in the gathering to claim their ownership on the World Cup.

Speaking on the campaign, Gautam Thakar, CEO Star Sports said, “The ICC Cricket World Cup is regarded as the most prestigious prize in World Cricket both, by players and viewers. Bringing the competitive element that every country holds during this tournament; the campaign showcases the very nucleus of the sport and how every team is going to England to get their hands on the Crown of Cricket. With more fan films in the pipeline, Star India is excited to bring the #CricketKaCrown theme alive and provide a spectacular TV viewing experience for fans across the country.”

Speaking on the campaign, Sukesh Nayak, CCO Ogilvy said, “This is the World Cup. It’s the crown of cricket. And the best in the world are coming to England to get it. Our big idea came from the thought of coming to England to get the crown. We took a fan perspective to this entire thing. The campaign will have multiple films and fully integrated execution. Radio, activation and digital will build the big idea of #CricketKaCrown.”

With a balanced team of bowlers, batsmen and all-rounders, the Indian team is going to England for the ICC CWC 2019 with a strong unit led by charismatic Virat Kohli. The team looks good at the back of successful tours in the past one year along with some powerful performances in the IPL as well. In addition to Virat Kohli the team boasts stalwarts like MS Dhoni, Shikhar Dhawan, Rohit Sharma, Dinesh Kartik and Ravindra Jadeja. The experience and skills that the team bring, along with the consistent performance by individual players is a strength that make the team title favourites.

The tournament is scheduled to be held in England and Wales between May 30th and July 14th. In the tournament opener, the host nation England will face South Africa on May 30t. India will start their World cup campaign against South Africa on June 5thfollowed by Australia and New Zealand on 9th and 13th June respectively. The much-anticipated clash between India and Pakistan is scheduled to be played on 16th June 2019.