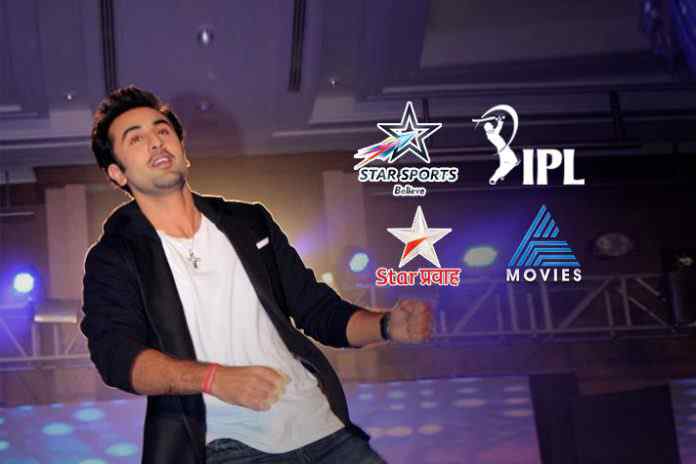 Star India network has charted out grand plans for the Indian Premier League Grand Finale. There will be something special for every fan across Star India Network’s regions and channels! For the Marathi- and Malayalam-speaking IPL fans, Star Pravah and Asianet Movies respectively will broadcast the IPL action live in the 11-year history of the league.

Star Plus, as reported by insidesport.co earlier, will air a two-hour high decibel prelude to the finale –‘Cricket Finals… Party Toh Banti hai’ hosted by Ranbir Kapoor. The Grand show will be followed by the final match.

Staying true to its commitment to re-imagine the VIVO IPL 2018, Star India Network will bring fans across various regions the excitement and joy of the finale in a language of their choice and with celebrities they love for the upcoming grand finale on Sunday, May 27th, 7 pm onwards, the broadcaster has stated in Press release.

The level of excitement amongst the VIVO IPL fans is at its peak with only one question in everybody’s mind – World’s toughest final, Kaun Jeetega? Different fans can enjoy the finale differently. The cricket enthusiast can enjoy the world’s toughest final on the Star India Network & Hotstar. Fans have enjoyed the VIVO IPL commentary in 6 languages – Hindi, English, Tamil, Telegu, Bengali, and Kannada which will now be expanded to include Marathi and Malayalam for the Grand Finale!

Star Plus will also telecast a two-hour prelude –‘Cricket Finals…Party to Banti hai’ hosted by Ranbir Kapoor followed by the final match. Other celebrities joining the party include Salman Khan, Jacqueline Fernandes, Kareena Kapoor, Sonam Kapoor! Star Pravah will carry the Marathi language broadcast for the first time in the history of the IPL with Madhuri Dixit-Nene and Swwapnil Joshi joining the celebrations on the channel while the Malayalam language feed will be broadcast on Asianet Movies. Star Gold will also join in with the Hindi broadcast for the Grand Finale!

“Iss baar finals mein sirf cricket nahi hoga…hasna hasana, naach gaana aur bahut sara entertainment bhi hoga!” The evening will begin with ‘Cricket Finals…Party Toh Banti hai’ hosted by Ranbir Kapoor a 2-hour high decibel prelude to the much-awaited finals on Star Plus, that will give the viewers the very best of two worlds – Star Plus and Vivo IPL followed by the telecast of the finale!

It will see a mélange of performances and fun-filled interactions with celebrities like Salman Khan, Jacqueline Fernandes, Kareena, Sonam Kapoor and more. Additionally, the new faces of Star Plus –Ravi Dubey, Radhey Gaurav Sareen, Kulfi Aakriti Sharma, Mariyam Deshna Dugad will also amplify the entertainment quotient of the finale. That’s not all this IPL has been literally rewarding for fans. By simply watching the matches on the Star TV network and while playing Watch ‘n Play on Hotstar, viewers stand a chance to win an SUV and 10 lakh other prizes every match.

Star Pravah will carry the Marathi language broadcast for the first time in the history of the IPL while the Malayalam language feed will be broadcast on Asianet Movies. The ever gorgeous Marathi mulgi-Madhuri Dixit-Nene and the heartthrob of the Marathi industry – Mr. Swwapnil Joshi will join the Star Pravah team to make it a truly euphoric evening.

The Dugout on Star Sports Select will continue to cater to core Cricket fans who want to stay ahead of the game, by taking viewers deep inside the game. “What is the captain going to do?”, “Who should bowl the next over?”, “What’s the weakness of the batsman?”, “Why is the captain changing the field?” – Topics that have typically been discussed in team dug-outs and in huddles between captains, players, coaches and team’s support staff are unravelled for viewers for the first time by a team of experts entailing some of the world’s foremost thinkers of the T20 game. The ball-by-ball coverage of the playoffs will entail predictive and prescriptive analysis – covering deep insights, rich data and video analytics, demonstrations – by Dean Jones, Scott Styris, Anil Kumble, Kumar Sangakkara, Darren Sammy, Brett Lee, Mike Hesson, etc.

The evening will reimagine the arena of sports broadcasting by bringing families from a wide range of demographics to witness the finale together, in a never-seen-before manner.

The broadcasts will bring the worlds of sport and entertainment together in a heady mix featuring dance and musical performances, appearances by Bollywood stars, hilarious sketches, riveting conversations, and trivia capped, of course, by the sizzling on-field action.

All in all, Finals Day promises to be nothing short of an explosive cricket and entertainment dhamaka for the entire family.