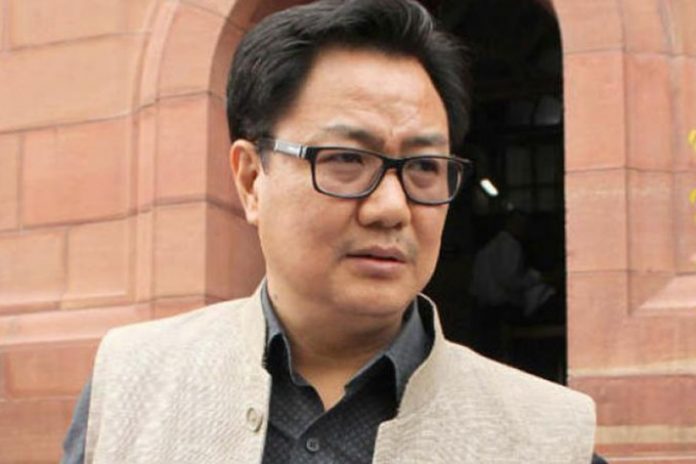 Sports Minister Kiren Rijiju on Friday said he cannot give a time-frame for when the crowds will return to stadiums after the government permitted sports gatherings of up to 100 people from September 21 in its Unlock 4 guidelines.

Speaking at the virtual launch of ‘enJogo’ App designed by Bhaichung Bhutia Football School to provide online training modules to footballers, Rijiju said the COVID-19 pandemic situation has made it difficult to say when the crowds will return to the stadia. India has recorded over 39 lakh cases so far.

“I will not be able to make a call on that (on return of crowd). I don’t know what will be the situation (of the pandemic) in next 1 or 2 months,” he said.

“I wish they (fans) are there in the stadia as soon as possible, we are hopeful of that happening. But health and safety of the public is also our priority,” he added.

The Union Home Ministry, on August 29, allowed sports gatherings of up to 100 people with effect from September 21, lifting the the total ban, which was earlier put in place till August 31.

However, such limited gatherings can only be held with the mandatory wearing of face masks, social distancing, provision for thermal scanning and hand wash or sanitizer, the guidelines said.

Rijiju said a decision on when crowds will be allowed inside stadia will have to be taken by local authorities by following the guidelines as laid down by the Home Ministry.

“As the Home Ministry has said the states will have to take a call on that according to the situation prevailing in their respective areas. India is such a vast country, situations are different in different areas even within a state,” he reasoned.

“So, local authorities will decide but under the protocols laid down by the Union Government. Everybody will have to follow protocols,” he said.

Rijiju also acknowledged that he received critical comments from some sections of the sports fraternity on his ambitious projection of India finishing in top 10 in the 2028 Olympics medal tally.

“I know many people wonder how it will happen, many people gave comments, not so nice. But it is a democratic country, people will have their own views and we do not think we should respond to those comments.

The Sports Minister said he has started planning the way ahead after seeing the recommendations of the Prime Minister’s Olympic Task Force set up in the aftermath of India’s dismal performance in 2016 Games.

“Based on those recommendations, we have now identified talented athletes for the Junior TOPS Scheme and they will be given a monthly stipend of Rs 25,000 each. These junior players will train for free and the 25,000 they will get is like salary they earn for their families.

“I hope many of these junior players will be competing in the 2028 Olympics. We need at least eight years to create a world champion. If we prepare right know, increase our base and make competition stiff within the group, we can achieve the target.”

Rijiju also said he will “never be a proud sports minister if former athletes live indigent lives”, indicating that his ministry will continue to support struggling ex-players financially.

“Many former athletes are not surviving a dignified life. The ministry has to help them.”