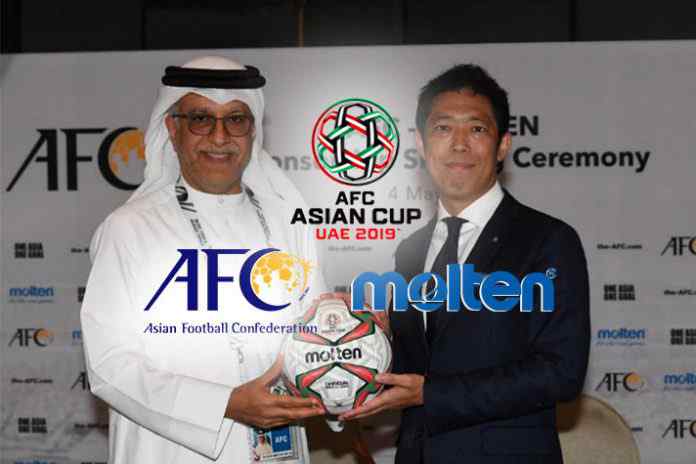 The Japanese sports equipment manufactures Molten has been announced the official match ball supplier for all the Asian Football Confederations (AFC) tournaments.

Under the terms of the agreement, the Hiroshima-based Molten Corporation will supply official Molten footballs designed exclusively for the governing body of association football in Asia and Australia.

Molten, starting with the AFC Asian Cup scheduled from January 5 next year in the UAE, will supply official match balls for the tournament as well as the AFC Cup, men’s and women’s youth events at the national team level, and futsal events. This will be the first time that Molten has provided an official match ball for the AFC’s football matches, Molten has stated in a Press release.

Shaikh Salman Al Khalifa, the AFC President said, “We are delighted to have Molten as the official match ball supplier of AFC’s national and club competitions. It is a significant partnership as it not only showcases Asia’s leading competitions but also one of the world’s leading Asian ball manufacturers. We are excited to have teamed up with the supplier of world-class footballs, and look forward to seeing the partnership grow in line with our leading competitions.”

Kiyo Tamiaki, President and CEO of Molten Corporation said: “At Molten, we continuously strive to produce the absolute best-in-quality sports equipment through innovative technology. Through this new partnership, we are committed to working hand in hand with the AFC to provide football of the highest quality to support the growth and development of football in Asia.”

Molten will supply match balls designed specially for the AFC Asian Cup utilizing the basic design of Molten’s flagship model Vantaggio 5000 Premier football. Molten’s unique thermal bonding technology has realized excellent sphericity and ultra-low water absorption. The dimples on the surface reduce wobbles in the ball trajectory that result from air resistance when the ball is in the air. The design features the identity colors of the 2019 AFC Asian Cup logo, green, red and black and the base pattern is inspired by the logo design.

Molten, in October 2017, had replaced Adidas as the official match ball supplier for the UEFA Europa League under a three year deal with UEFA until 2021. Its basketballs are the official balls for all FIBA worldwide competitions, and numerous domestic leagues outside of North America. Through the 2006-07 season, it supplied balls for the elite Europe-wide Euroleague.

Molten is also the official volleyball producer for USA Volleyball and the NCAA Championships. The company’s first official step in football was with the supply of balls for Alashkert FC in the Armenian Premier League.