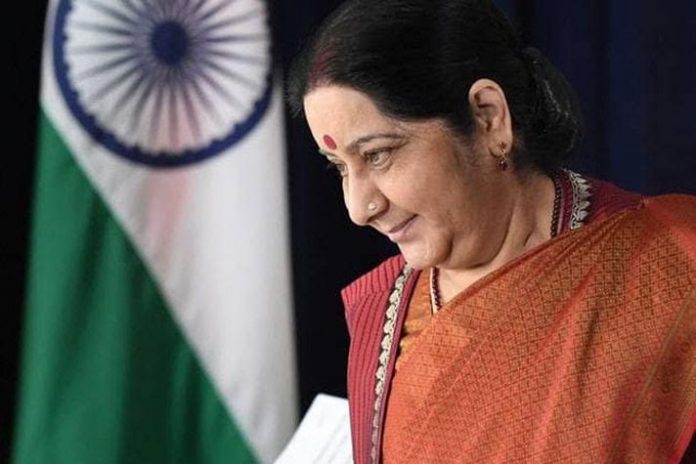 Swaraj passed away at the All India Institute of Medical Sciences (AIIMS) in New Delhi on Tuesday night after suffering a cardiac arrest. She was 67.

“Deeply saddened by the news of Sushma Ji’s demise, may her soul rest in peace,” Kohli wrote on his twitter page.

Sports Minister Kiren Rijiju said Swaraj will always live in the hearts and minds of the people.

“I have no words left with me at this point of time. She truly lived for the motherland INDIA. Sushma ji, you will forever live in our heart and mind,” he said.

“Shocked by the sudden demise of Sushma Swarajji. In a political career spanning over 50 years, she touched a billion hearts with her strength, grace and compassion. Her clutter breaking approach as the External Affairs Minister will always be revered and remembered,” Rathore tweeted.

Cricketer-turned-politician Gautam Gambhir said her death is a huge loss for the country.

“I’m beyond aggrieved at the passing away of Sushma Swaraj A veteran politician and a pillar of the BJP, she was loved by everyone. She will be remembered as the most endearing and helpful politicians of recent times. My condolences to her family and friends. A huge loss for India,” said Gambhir.

Tennis ace Sania Mirza said she had the honour of working with the BJP leader.

“Shocked at the passing away of my dear Sushma Swarajji. Had the honour of working as the brand ambassador of the ‘girl child’ campaign under her able guidance and will cherish my personal relationship with her forever. R.I.P. ma’am,” said Sania.

“I was so sad looking at the headlines in the paper today. I really really liked Sushma Swaraj ji. She was someone to look up to. She was a great leader, a great orator, a strong woman and true to her work. India will miss her deeply,” Heena wrote.

Other cricketers such as Suresh Raina, Mohammad Kaif and Aakash Chopra also condoled her death.

“Fierce, result-driven and a people’s person she was all of that and more. A true leader. Still unable to process the news of Sushma Swarajji’s passing away. Extremely disturbed! A big loss for our nation. May you rest in peace!” said Raina.

In his condolence message, Kaif wrote: “Here in the West Indies and just heard the terrible news of passing away of #SushmaSwarajji. Condolences to her family, gone too soon.”