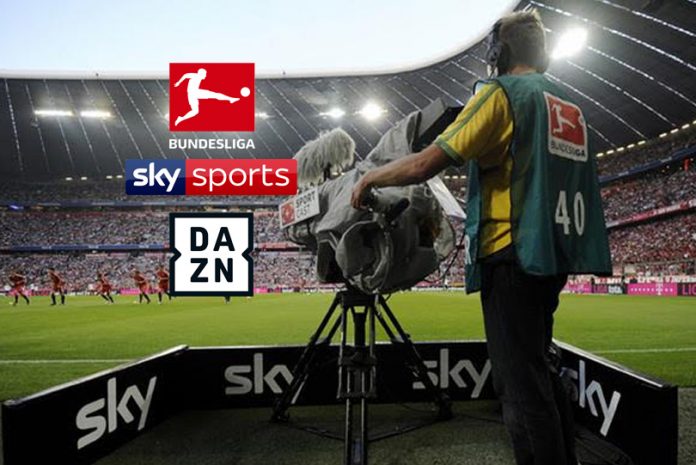 The Associate Press has reported that the Pay-TV giant Sky and sports streaming subscription service DAZN have secured the domestic broadcast rights to German soccer’s Bundesliga from the 2021/22 season until 2024/25. But the big news is that the agreement is less than what Bundesliga could fetch from its domestic market during the last cycle.

In the last cycle Bundesliga’s 4 year domestic rights were taken by Sky, Discovery-owned Eurosport and public service broadcaster ARD for US$5.16 billion. Revenues from the DFL’s current domestic broadcasting agreements total $1.28bn per season. Initial reports in Germany have suggested that the value of the rights from 2021-22 will decrease.

According to the report by AP the current price of the contract is far less. The value of the league’s domestic rights shot up 85 per cent during the last auction. However, the AP said a lack of competition this time saw the price go down.The new deal, which is set to be announced on 22nd June, will see Sky show 200 Saturday games per season, the AP said, with DAZN able to show 106 games across Fridays and Sundays.

DAZN currently has a short-term deal with the DFL, which allowed it to broadcast 10 matches after the 2019-20 season restarted following its Covid-19-related suspension. This follows a sublicensing agreement with Discovery-owned Eurosport, which acquired a 45-match package of rights in the 2017-21 cycle tender. Eurosport sublicensed these rights to DAZN, covering 2019-20 and 2020-21, as part of a wider agreement.

In response to the league’s prior suspension, Discovery has so far declined to pay any more fee instalments, citing a ‘special termination’ clause. This meant DAZN had to agree a direct deal with the DFL to broadcast the remainder of the matches it was due from Discovery.

The German Football League (DFL), the organising body for German soccer’s top two leagues, had previously been forced to delay the Bundesliga’s domestic media rights tender because of the coronavirus pandemic.

If the details of the AP report are correct, the Bundesliga is the latest major European soccer league to see the value of its domestic rights drop in recent times. England’s Premier League, for example, secured US$6.1 billion for its current three-year deal with Sky Sports, BT Sport and Amazon, which marked a slight decline on the record-breaking US$6.6 billion it generated during the 2016 to 2019 cycle.