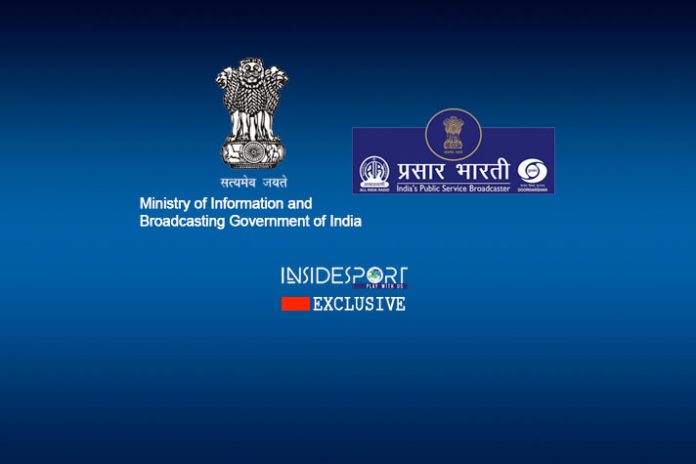 Sports broadcasters in India will be a relieved lot. The Ministry of Information and Broadcasting has put the action on the Draft Sports Broadcasting Signals (Mandatory Sharing with Prasar Bharti) (Amendment) Bill 2018 on hold. At least until the General Elections this year.

The MIB had earlier set the “final” deadline for “receiving feedback/comments from General Public/Stakeholders on the Draft Sports Broadcasting Signals (Mandatory Sharing with Prasar Bharti) (Amendment) Bill 2018” till January 15, 2019.

However, a source in know of the development have revealed that there will be no further action on the Draft Amendment Bill until the Lok Sabha election this year. “The draft unofficially has been put on hold indefinitely,” the source further added.

The Draft Bill 2018 is proposed “to enable telecast of ‘Sporting events of National importance’ on mandatory channels of Doordarshan via Cable/DTH/IPTV Operators”.

Prasar Bharati in the present scenario cannot put the shared signals of the “sports events of national interest” on the cable/ private DTH and IPTV platfroms.

Earlier, the final date for the feedback and comments on the proposed amendment had been extended on several occasions. The MIB had first sought opinions on the proposed bill after putting the Draft Sports Broadcasting Signals (Mandatory Sharing with Prasar Bharti) (Amendment) Bill, 2018 in public domain on October 17. The date was extended several times till November 16, December 31 and then January 31, 2018, was declared the last date to receive the feedback and opinions.

The Ministry had then issued a notice to extend the date. “It is informed that the deadline for receiving feedback/comments from General Public/Stakeholders on the said draft Bill, 2018 to enable telecast of ‘Sporting events of National importance’ on mandatory channels of Doordarshan via cable/ private DTH/IPTV Operators has been further extended by this Ministry till 15.01.2019,” read the last notice.

The MIB had claimed that the amendments are aimed at providing widest possible reach to the sports events of national interest.

The section 3(1) of the Sports Act at present makes it mandatory for the broadcasters to share of the signals of the sports events of national interest (like the Olympics, Asian Games, international cricket involving the Indian team, ICC World Cups or Asian Cricket Council competitions, etc,. with Prasar Bharti and “to show the Doordarshan channels as per the Cable Television Networks (Regulation) Act, 1995”. The ministry in its bid to extend the preview of the clause has sought feedback from people and the stakeholders.

The Draft Amendement was pressed after the MIB had failed in its earlier attempt to put the sports events on national importance’s Doordarshan feed on cable networks. The Supreme Court of India had ruled that the public broadcaster Doordarshan cannot air events of national importance on private distribution platforms like cable / private DTH or IPTV protocols.

The Ministry has the argument that the purpose of Sports Act 2007 gets defeated as a large number of viewers are either unable to watch these sporting events or are compelled to watch them on highly-priced sports channels.

At present, the sports act limits the live feed received by Prasar Bharati from the private sector broadcasters to only be retransmitted through Doordarshan’s terrestrial and DTH networks and not for cable operators. As such, viewers who do not have DD Free dish or Doordarshan’s terrestrial network are either unable to watch the events, or sign up for services by paid sports channels.