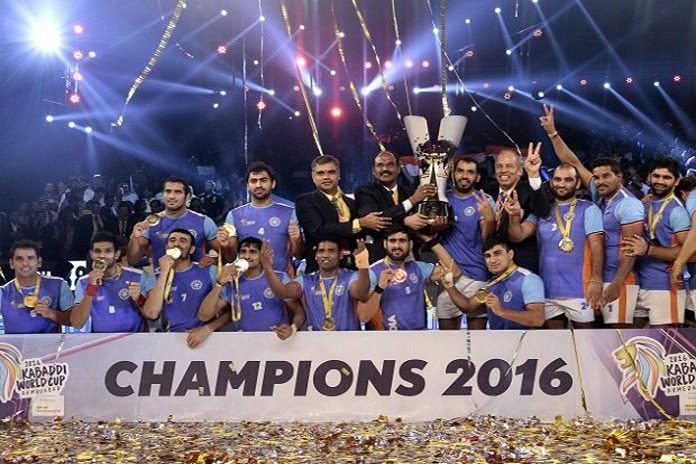 Team India made history at the 2016 Kabaddi World Cup (KWC) as they lifted the coveted trophy. On 22nd October 2016, the entire nation was glued to their screens as India took on mighty Iran in the finals and emerged victorious in the iconic clash. With Kabaddi fans asking for some of the best of Kabaddi action on social media, Star Sports will exclusively broadcast the unforgettable moments and matches of the 2016 Kabaddi World Cup.
From 20th to 24th April, every day at 10.30 am, fans can watch a series of ‘Kabaddi World Cup 2016 Superhits’ with some of the iconic matches, which include:
Reminiscing the moments from the matches, Kabaddi stars who were part of the 2016 KWC take you down memory lane as India won the title.
Team India’s Star raider of 2016 KWC and a Kabaddi legend Ajay Thakur had a brilliant tournament. He shared his memories of the semi-final match, “I grew as a player in this tournament- the confidence that my coach and captain showed in me resulted in a performance that allowed me to support the team in every match. When India reached Semi-Finals, I remember the mixed emotions that the entire team felt. Anup (Kumar), our captain told us ‘Just play your game, don’t feel pressured – we will win’ – that motivated all of us. The match against Thailand was popularly known as Favourites v Underdog; us being the favourites. We beat Thailand 73 – 20 and entered the finals. But what stayed with all of us was the crowd at the stadium, it was overwhelming – the support we got with the fans cheering for us, putting on torch lights, and the celebrations when we entered the finals. It was a terrific experience and a day that I will never forget.”
Captain cool of the 2016 KWC, Team India – Anup Kumar played a crucial role in the team’s success, and the final match against Iran was the deciding game, what was on his mind before and during the match, “I was confident that the team will win – their performance throughout the tournament was outstanding and got better with every match. We had the best of players, who could not be beaten easily. At the same time, we knew we were up against Iran who were also a brilliant team but we were confident becase we won the finals against them on previous occasions. The team came together and put in a fantastic effort that resulted in our win. The match was a close one with the Iranian Team putting up a good fight. I put forward my best raiders right from the beginning, once we had a lead we attacked – that was the strategy used and Ajay Thakur had a brilliant game. We won 38 – 29, and the celebration and emotions finally poured out on the mat. The team along with the fans at the stadium were dancing and celebrating and we had achieved the ultimate prize– we had won the 2016 Kabaddi World Cup. I will surely watch it again to relive the memory!”
Re-live these moments once again exclusively on Star Sports from April 20th to 24th at 10.30 am on Star Sports 2 and Star Sports 3. Let’s go down memory lane…